The move from passive mixing and filtering, to active mixing and filtering, means I suddenly needed a PSU that could also supply a negative voltage rail. Rather than just buying a Frequency Central power unit and getting on with my life, I decided to buy a Eurorack Synth Noodle Toaster v2 PCB, and pre-flashed chip, from amazingsynth.com. I realised that I as I’m only starting out, a way of generating various signals, gates and counting frequencies, might prove useful, in addition to being able to provide +/-12v.

I intend to document my progress here, just in case anyone else decides to build one of these things.

In an unusual fit of KISS, I decided that I would just buy the contents of the Mouser BoM that is linked further down the amazingsynth.com page. With that in mind, it seemed prudent to buy both the tactile switches and LCD module at the same time as the PCB and chip. While waiting for everything to arrive though, I decided it would be prudent to at least price up buying all the components from a UK supplier, so I started a spreadsheet.

It wasn’t long before I started to have doubts about the accuracy of the Mouser BoM. I’m not overly experienced with electronic componentry, but I can look at a data sheet and work out from the product ID what the pin orientation should be etc. It seemed odd that certain components, like the trim pots, seemed to be listed with product IDs that had incorrect pin layouts.

For example, according to the data sheet, the Bourns 3386U-1-502ALF has all three pins in a straight line. All the photos of the PCB I could find online though, made it look like that trim pot needed the pins in a triangle layout, i.e. a 3386P. My concerned were further raised when I looked at the original BoM linked to from the Mutable Instruments website, and it listed a 3386P.

This was enough for me to ditch any idea of buying the Mouser BoM, so I went through each component on it and found what I though were the correct variants, or similar alternatives. This would’ve been easier if I could’ve found any super clear photos of the PCB online. There are a few but mostly with missing component information, the vast majority are of the older v1 board, so I couldn’t rely on those, just in case.

My PCB arrived the other day, so here are scans of both sides, so you can clearly see what components are supposed to go where and what their pin layout should be. 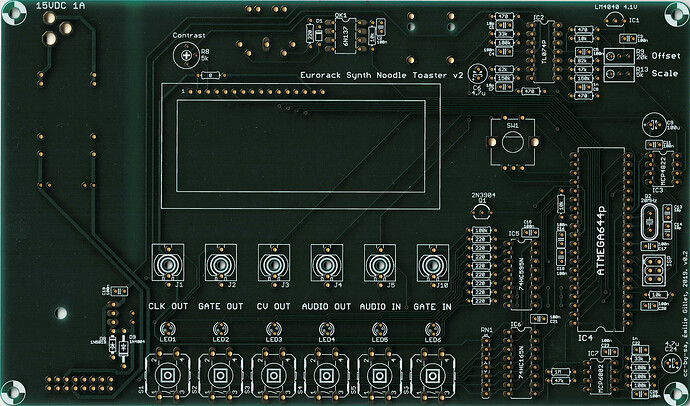 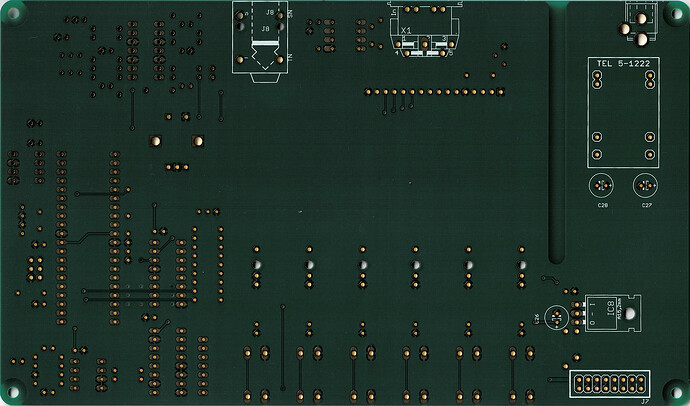 The first step to creating my own BoM for this project, was to convert the Mouser BoM. I found it very confusing that all the components were mixed up and that they didn’t have identifiers for where they were on the board. I thought that someone must have documented building one of these things, or made a video, or something. Either my google fu is weak, or pretty much nobody has bothered.

I think there was some confusion, not helped by the amazingsynth.com website, about what this thing is actually called. Is it a Module Tester, or a Noodle Toaster…? You’d think if it was Noodle Toaster, the big page title on your website might read New Noodle Toaster v2 PCB and pre-flashed chip set.

Anyway, searching for Noodle Toaster, rather than Module Tester, eventually turned up a couple of recorded livestreams of someone trying to build it. I wouldn’t say it made for riveting viewing, but it was reassuring watching someone who appears to have way more knowledge and skill than me, struggle to figure out what was going on.

It further highlighted the fact that the Mouser BoM is a load of bollocks and should be avoided at all costs contained a load of inaccurate components. The other thing it highlighted, was that I could probably get an accurate list of components from the original schema files that are on GitHub. They wont load in KiCad though, but thankfully @analogoutput has cloned the original repo and converted the files to they can be loaded by KiCad.

Armed with a freshly exported bill of materials, it was simply a case of going back through each component and trying to ensure I had the correct amount of the correct thing. I’m not 100% sure I’ve got everything correct, so do your own research and take the following table with a pinch of salt:

you can always just email me if you’re having problems sourcing parts, there are a small number of inaccuracies currently because I’m having to pedal furiously making subs to keep the carts filled with in stock items, someone even made me a list of them.

you can get bom’s in excel format from the github, no conversion needed.

I have 2 pcb l of this spares and flashed chips too.

right, things someone mentioned to me recently were the trimmer, the encoder and the nut, I’ve replaced all those in the cart, everything else should be fine.

you can get bom’s in excel format from the github, no conversion needed.

I was going to send you an email, but am still recovering from COVID weaponised sinusitis, so my attention span is rather limited at the moment. I assumed that the Mouser BoM was created by someone else, as I’ve found it linked to from other websites too. The main driver for doing it myself, was that various items were out of stock, or on long back order, on Mouser, so I’d need to source them anyway.

I’ve looked in the GitHub repo, but can’t find any sort of BoM.

right, things someone mentioned to me recently were the trimmer, the encoder and the nut, I’ve replaced all those in the cart, everything else should be fine.

The only thing I haven’t been able to find an equivalent of, is the tactile switch caps. To the point where it might be easier to modify the EPS enclosure file to take round caps.

Frustratingly there isn’t a single UK supplier that has everything, you can only get that resistor network off Farnell for instance, not even from from their CPC sub-domain.

Also stuff like the VO2601 can be got from RS, but you can only get the 6N137 variant from Farnell. Buying small amounts from Farnell leaves you open to the £5 / £10 small order surcharge, or if you select the wrong thing, the £15.99 US delivery surcharge.

that’s been a bit of a team effort that cart, I started it for v1 then someone else added some bits for v2, then it’s been reworked as bits go out of stock, which has been happening a lot lately

the cart doesn’t include any of the case hardware, I include all that with cases, I have got mouser numbers for all that stuff that someone sent me, maybe easier to mod the case or file to take round caps if you can’t find them or just make something, you can operate the switches without them if the tester is uncased.

looks like the free version of eagle can still be downloaded, put a link in the other thread, the euro pcb’s all have excel boms (in the “hardware” subfolder), there might be alternative resistor networks and optocouplers available here, or on ebay

incidentally if you aren’t interested in MIDI you can probably do without the optocoupler, or if you can manage without it temporarily

Frustratingly there isn’t a single UK supplier that has everything, you can only get that resistor network off Farnell for instance, not even from from their CPC sub-domain.

The wonderful world of components sourcing. For one module I did I spent a couple hours searching and it looked like I’d have to order one part from one source and one part from another source, and then I discovered Thonk had both parts, and shipping from England to the US would be cheaper than the combined shipping from the two US companies.

It’s the shipping that’ll kill you in cases like that. I rarely buy from Mouser because most parts I can get cheaper elsewhere, and then the few parts I can’t don’t add up to enough to justify Mouser’s minimum shipping rate which I think is $8 or $9, well above Digi-Key.

But if Mouser is the only place that has all or most of the parts you need it can end up being cheapest to buy from them. You might be best off dealing with Mouser UK.

mouser ship free to the UK with a £33 spend

and if you order the switch caps, they’ll send them separately when they come in, they’ve had them in and out of stock already this year

It’s the shipping that’ll kill you in cases like that.

Yeah, the trick seems to be to distribute the components between Rapid, RS and Farnell in such a way that you get passed the small order surcharge with Farnell, but still get free shipping from Rapid and RS, while also not buying multiples of items you’re never going to use again.

It seems totally nonsensical to order anything from the US when I can get it all from UK suppliers. 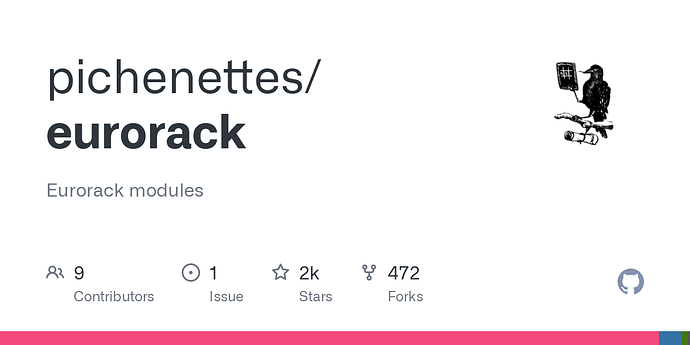 Eurorack modules. Contribute to pichenettes/eurorack development by creating an account on GitHub.

you need to spend about £30 at farnell rapid and rs to get free shipping don’t you? £20 at cpc I think

There isn’t a module tester / noodle toaster folder in that GitHub repo.

you need to spend about £30 at farnell rapid and rs to get free shipping don’t you? £20 at cpc I think

right, looks you can get the recom in the uk which is around £20, if you don’t want to use the cheaper meanwell unit I found at mouser, that’d get you quite a way to free shipping from one UK supplier, take that, lcd and switches off the mouser cart and you’d be left with about £40, well above free shipping threshold so you could drop off some of the stuff you can get cheaper here, checked the cart and the red switch caps I found are still in stock there, so you could get all the fiddly stuff from mouser and hopefully then all the more common stuff from the same place that sells the recom, mouser charge UK vat at checkout so you don’t need to pay anything extra for customs handling, it just gets delivered in about 2-3 days normally.

I’ve gone ahead and added a KiCad version to the forked repo, just an import of the Eagle files, and with a BOM auto-generated from the schematic: module_tester/module_tester-v02_bom.md at master · holmesrichards/module_tester · GitHub

Took a punt on a TS100 soldering iron, so purchased all the necessary components to get on and get this built. All except the 3296W 20k trim POT, as both Rapid and Farnell are out of stock till late next month. Thonk have BAOTER ones for 60p, but £2.58 P&P. Buying one off eBay is only 18p cheaper, so Thonk it is then…

I decided to build one of these. Decided I wanted to re-dimension the PCB, to better fit an existing enclosure, and to change a couple of the footprints (1/4" jack and MIDI socket) to match components I already have. So I modified the imported Eagle files in KiCad. While I was at it I modified the footprints to get refs and values on the silkscreen (the resistors had NEITHER!) and decided to use a right angle header for the ribbon cable. And I added mounting holes for the LCD just in case I decide I want them. I’ve just placed the fab order. 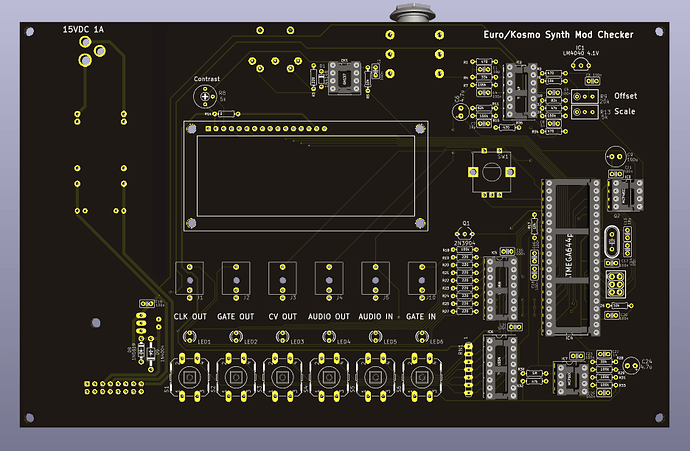 Have you thought about what you’re going to do for a case…? Turns out I know someone with a laser cutter, so in discussions to see if he’ll cut some perspex for me.