the shaper ? have not had a chance to plug in yet . 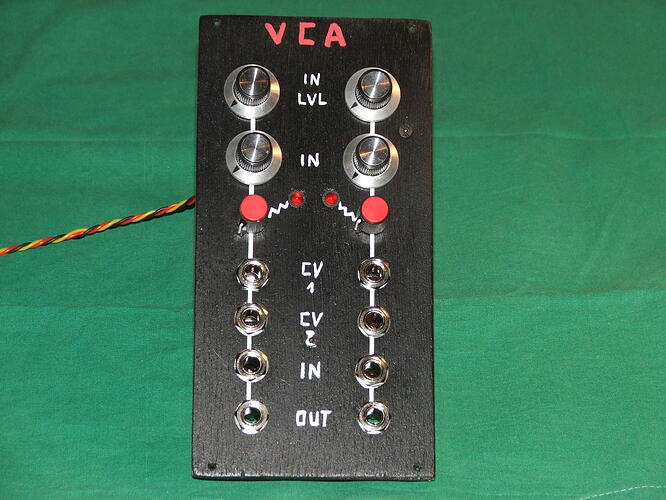 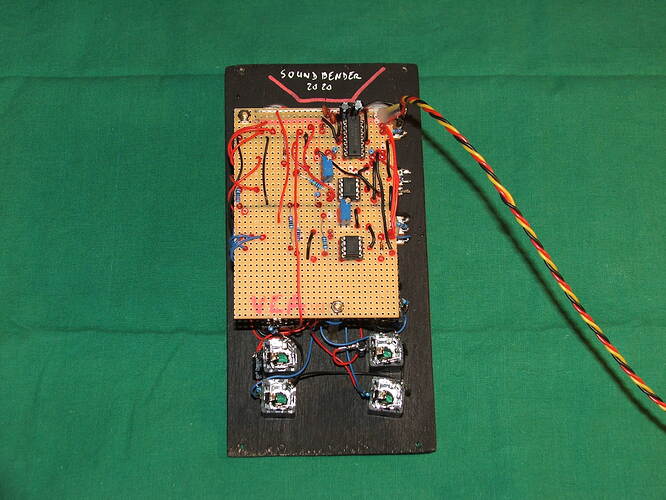 Well the sound is rotten with my camera (unwanted white noise

as usual) but here’s a patch with this new VCA and also i make a test with 3 VCOs to make a minor chord, a first, it’s cool.
This chord inspired me a little hip hop at the beginning and I doubled the chord for skanks and an ending rather dub (…dub dub dub …with delaly 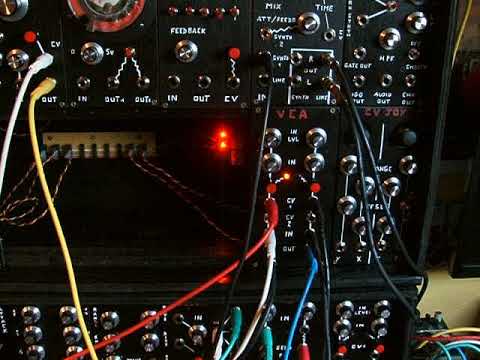 Man… it’s time. This is an intervention. You gotta put down the soldering iron and lay down a track. I want to hear what you can do with all of those bits working in harmony!!!

What kind of music do you like? Are you a French house guy, German Dub Techno, or UK Dubstep? I’d love to hear a 140 dub stepper made on that thing!

(via @Dud’s many posts in the music share thread)

Thank you @fredrik , yes with my modular there is this playlist which starts without an external controller and which evolves with the cases which are added. But I didn’t know anything about modular 3 years ago.

I was doing a little electro with a friend ( Lobotomix : http://lobotomix.blogg.org/ and there were also videos in this forum ) but no knowledge of the style. Since then I have been interested and analyzing patch …
Guitarist at the base, I really like a lot of different music, punk, blues, metal, reggea, dub, traditional … but I don’t really listen to electro. 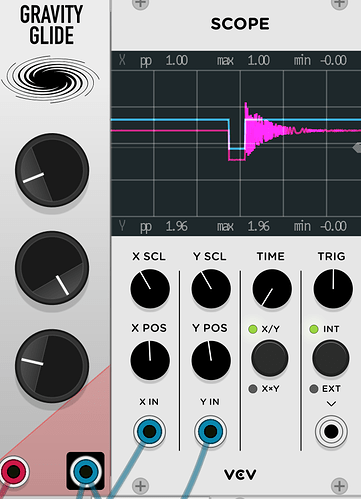 I had an idea for a module and I prototyped it in VCV Rack. It’s a gravity-simulating portamento/glide, so the glide will overshoot the target and then oscillate around the target note until it stabilizes, like an asteroid orbiting a planet.

The effect is actually pretty cool, but I need to fine tune the knobs, it’s way too sensitive.

I was hoping to make this available as an module-app for my “Kosmoduino” project, but that project is on hold for now as I’ve had too many KiCad-induced rage quits.

This sounds really really nice ! Have I ever asked you about the schematic for the VCA? I also need some that close properly and that are not built with unusual ICs.

which tells me it’s Niklas Rönnberg’s version of the ASM-1 VCA that uses the obsolete CA3080, so you could probably use half an LM13700, or get the Rochester version (I think Thonk has it), or the Alfa AS3080.

EDIT 1: LM13700 is perhaps not a great option here, since the circuit manipulates the 3080 supply voltage. You’d have to tweak the Iabc source a bit. EDIT 3: See here.

I took the day off, so while everyone’s out of the house I scuttled down to my secret underground laboratory to work on my VCF: 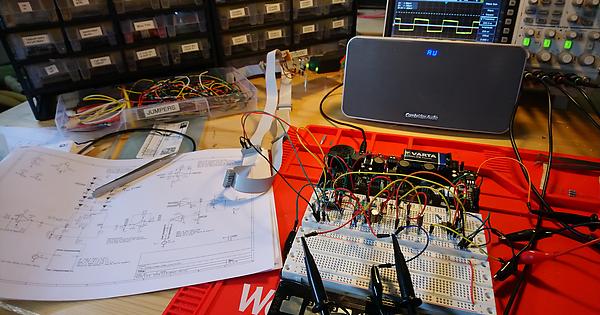 Here’s the VCA I made: 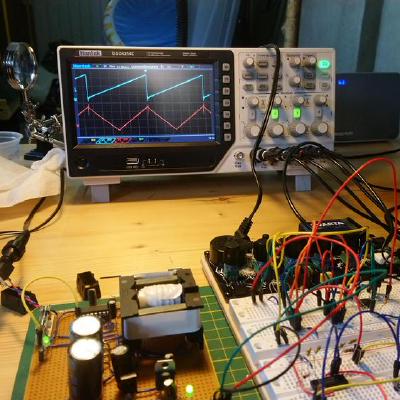 Simple OTA based VCA. Contribute to jazamatronic/dual_lm13700_vca development by creating an account on GitHub.

Cool, is this an original design?

I’d like to try the Mauritz Klein version, but I guess I need to shell out for the Patreon because I haven’t found the diagram yet.

The filter core is similar to this one that you posted:

[bilde] Thinking about giving this one a shot, but man, his style is crazy! I respect it, but it doesn’t make it easier. I also think it’d be good, if possible, to replace the LM13700 with a TL074 since they’re more common around here, though the pintout is different.

I looked at the matched pair transistors they use on the x0x box and am using some of them for the exp conv for the cutoff and the current sink - might see if I can use them for the diodes in the filter stages too. That way it may be possible to have a diode ladder and a transistor ladder on the same PCB?

http://timstinchcombe.co.uk/synth/Moog_ladder_tf.pdf is a good resource too.

Once I manage to get a voltage controlled resonance circuit going I’ve got some ideas to try out - feedback some of the original input to counter any bass loss, and see if I can do some analog maths and derive a HP from it.

It’s on my to do list too! I beleive Moritz shared the final schematic of the diode VCF in the latest video, look in the description.

Thx, ah yes i correted it. (and delete the older one in my previous post) like this ? [diode ladder filter schem]

and a stripboard layout

soon i think a version with Hi or Band pass add

psst … here’s an improved multimode version. i’ll do a video on it soon. https://tinyurl.com/yf9klq7z you can switch on the different modes either individually, or mix and match them for whacky results.

Finally managed to finish my take on the tuner vco. There’s a few little differences, the ref voltage can be sent to other units in a chain (untested) 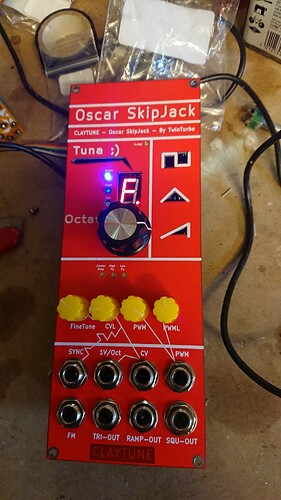 The front had the locating peg for the rotary switch 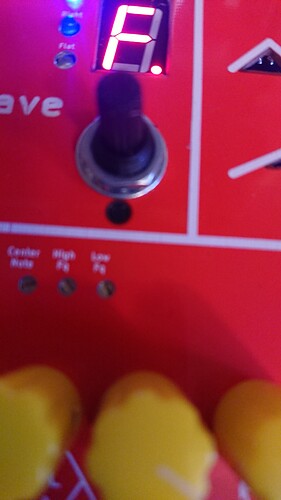 Not turned out too bad 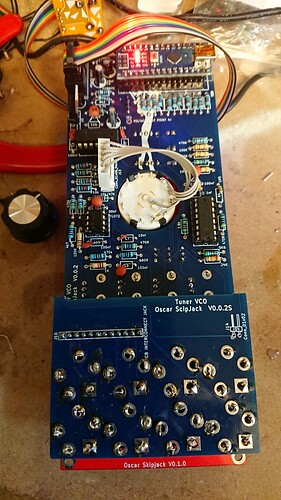 And the safety, not sure it’s doing what it’s supposed to but all the controls do something. 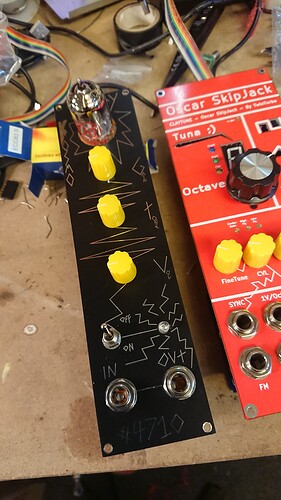 Resonance on the VCF looks like it kinda works: 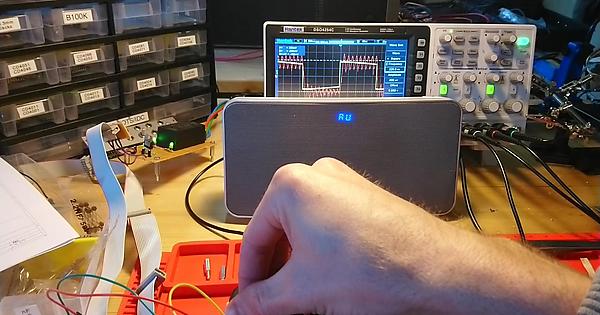 Need to work on the Fc and RES CV ranges/response.
It does self oscillate - but it’s very quiet - need to see what I can do about that.
Then - need to see if I can mix in some of the original signal to try and beat that volume loss when cranking on the resonance.