Hey, I am planning to make a KOSMO version of Mutable instruments Grids for easy drum sequencing.
Can I do it in 10 cm width? Or do I need 15cm? I really like to have space, but I am also getting close to filling up all my cases! (I know, I know, I should build a new case, but my room is small!

I think I might get away with the 10cm, it’s only 3 knobs per row, like Sam’s delay, but that one does feel a little bit crowded… Also: 10cm is cheaper 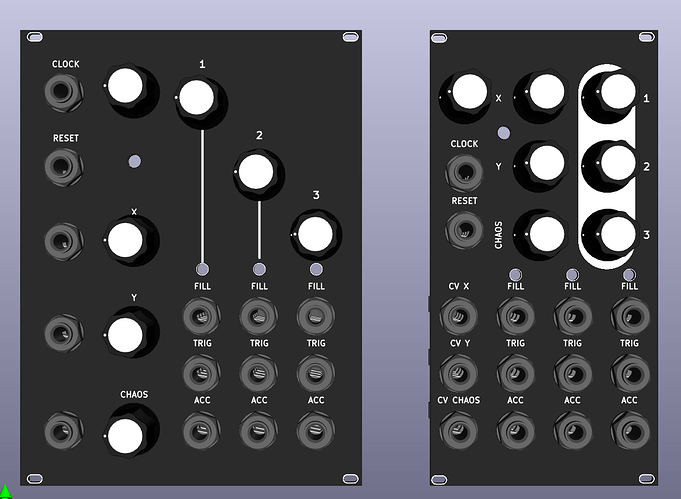 In my opinion 15cm looks better.

I’m not familiar with the original, and I think it depends on what the knobs do and on how you plan to use them. My preference is for knobs to be large enough and well spaced enough that you can easily grab and manipulate one, or even two adjacent ones simultaneously, in the course of playing. But some knobs are more amenable to being played than others, some you’d rarely if ever want to move during playing, and those can be smaller and closer together.

The apparent discordance in the 10 cm version between the jacks, which I guess go 1-2-3 left to right, and the knobs which go 1-2-3 top to bottom, is unfortunate. So’s the disconnect between the X, Y, Chaos knobs with the corresponding jacks.

If you go with 15 cm, though, the Furies will come after you if you don’t fix the misalignment between the Clock and 1 knobs, and between X and 3.

I was thinking about that, and that if it were 12.5 cm you could swap the X/Y/Chaos jacks with the 1/2/3 knobs, putting the former next to their corresponding knobs (maybe jacks on the left and knobs on the right if you’re right handed). Then transpose the Fill/Trig/Acc jacks so they also go 1-2-3 top to bottom. But then I realized those jacks are too close together vertically to put a knob on the same row, so it doesn’t quite work. And with that said, I don’t see that you can get much out of going to 12.5 cm — you can make the knobs a little further apart horizontally but they’re still pretty close vertically.

Good input! I think I will mostly use the 1,2,3 Knobs (they determine the density of the drum pattern, how many notes are in pattern, 1 is kick, 2 snare, 3 hihats) and also the knobs with X and Y (they change the groove itself, like two coordinates on a “groove map”) I won’t change the clock speed very often (if at all, because it will be synced to a main clock), so maybe I could use a tiny knob (no knob plastic shaft) instead and then move the other knobs further apart… 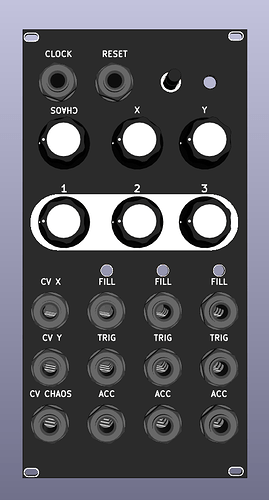 Personally I think that looks great except for:

Thank you!
Yeah, CHAOS upside down was a bit of a stupid joke, because, you know, it’s chaos

You are right with the trigger leds, the issue is too that the fill jacks are inputs, not outputs, this is not really clear here. maybe I need to find another place for the LEDs at least.
Interesting idea moving the knobs to the top, but I fear that would break the match between the 1,2,3 knobs and the outputs a little.

I’d advocate putting the clock knob next to the clock jack. From the original panel I see the hole next to it isn’t an LED as I thought but a push button. Is that hole big enough?

Also in the original the LEDs are above the Fill jacks… but yes, they could go further down. I’d normally use 5 mm but given the tight space I think I’d go with 3 mm here.

I’d change around the left-right order of the top knobs or the top-bottom order of the left jacks to make them match. 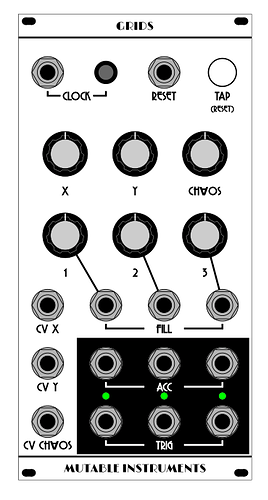 Can you put the clock and reset jacks on the left hand side so you don’t have cords hanging over the controls?

Or underneath the controls would be nice? 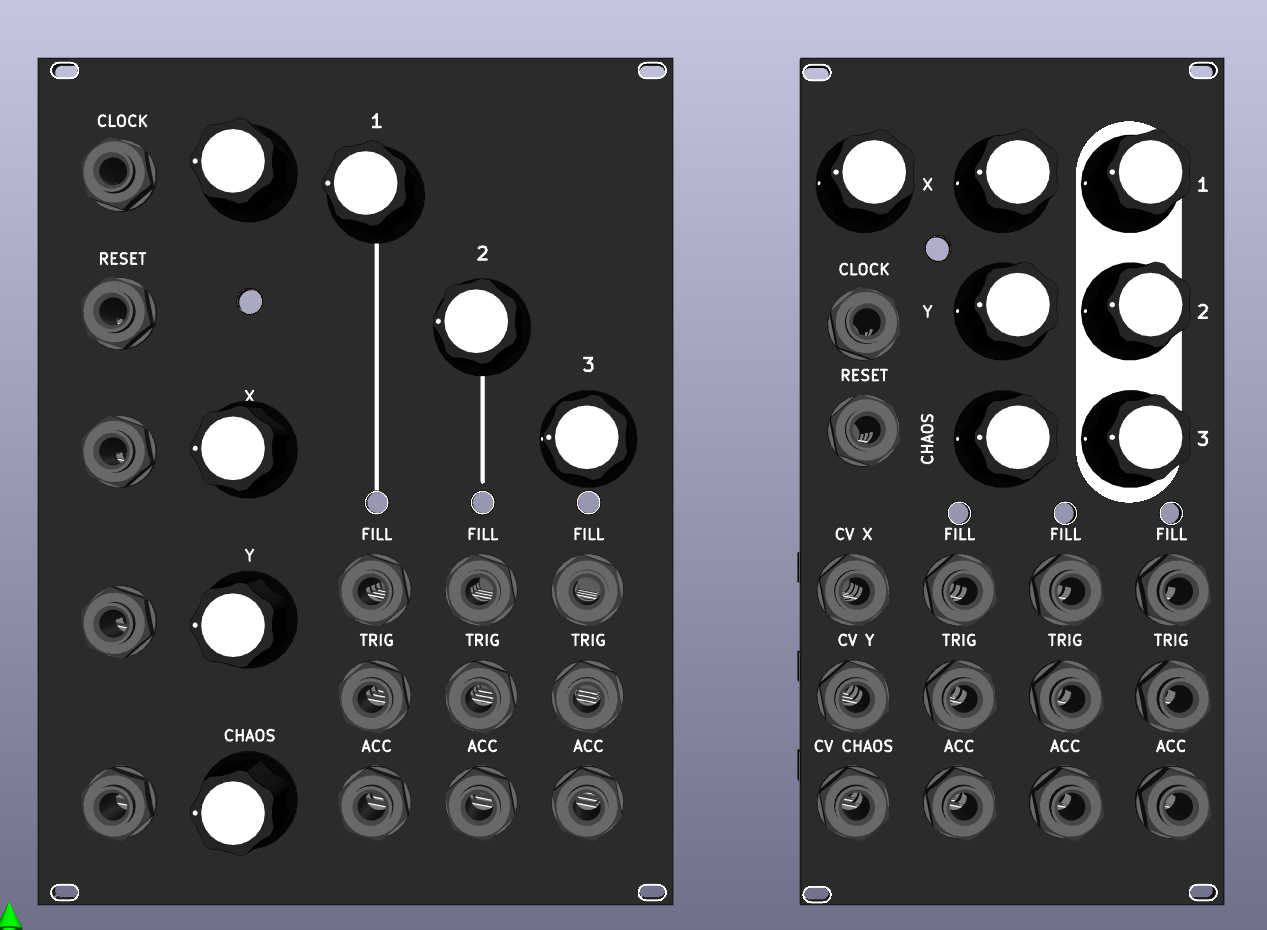 Interesting idea moving the knobs to the top, but I fear that would break the match between the 1,2,3 knobs and the outputs a little.

If it’s not on the top row, it’s likely to have cords hanging over it anyway. That’s the nature of things. You could ditch the cords and design for matrix switching a la the ARP 2500 but that has other issues. Someday someone’s going to make a bazillion dollars in the Eurorack market with little tiny paired wireless dongles you plug into the source and destination modules, but not today.

I’m getting close to how I want it

Still not sure about the placement of the labels… left, top bottom? 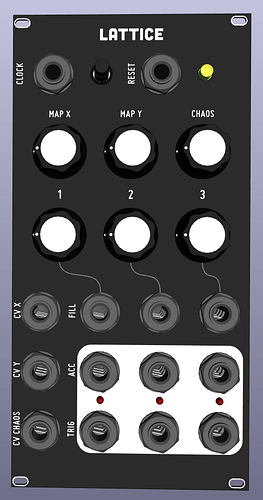 Consider using small pictograms as an alternative to squeezing in sideways-oriented text.

https://thenounproject.com/ is an excellent source for such pictograms.

Also @fredrik posted these resources once:

The patch and tweak folks have a bunch of symbols here: http://patchandtweak.com/symbols/. They’re designed to describe patches, not modules, but may provide some inspiration. In the book, they mention the following prior works: Liner notes for Nonesuch Guide to Electronic Music (Beaver and Krause, 1968) Electronic Music: Systems, Techniques, and Controls (Strange, 1972) Patch Notation: A Business Approach (Bugg, in Synapse March/April 1978 (PDF)) Serge Modular Music System manuals.

I particularly recommend the Patch and Tweak symbols, which are available as vector (SVG) files so they can be resized easily.

I generally like symbols and pictograms, but I think it’s difficult to use when there is no common language for this domain yet. I mean, it could work for inputs and outputs and maybe also clock, but for trigger, accent and fill? I don’t want to spend another year to invent a universal modular symbol language before I can make this

By the way, I have a toaster at home that has 4 buttons with symbols, of which I understand 2 (start and stop), the other two I have no idea, one has a snowflake and the other one a toast with some waves (heat?) above… They seem to make no difference to the bread, even after 4 years and a lot of experiments I still have no idea what these symbols mean 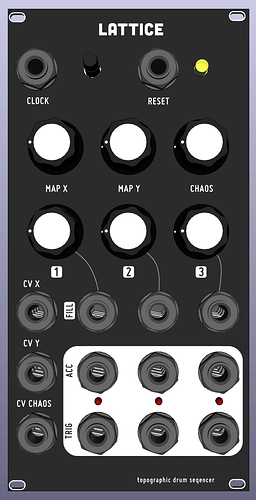 This is what I ended up with so far. The routing is almost done as well, but I it will still be some time before I order, because I want to finish some other projects first and then do a big order

EDIT: I also would like to credit mutable instruments on the panel, but I don’t want to just use their logo but I also don’t want to write a lot of text explaining that this is a derivative. How do you handle this?

On my toaster oven you can tell it the bread/bagel/etc. is frozen and it modifies the cycle to account for that, and it’s indicated with a snowflake icon.

EDIT: I also would like to credit mutable instruments on the panel, but I don’t want to just use their logo but I also don’t want to write a lot of text explaining that this is a derivative. How do you handle this?