I’ve been reading the following topic about making a buffered multiple. But I still wasn’t sure what the ideal schematic for it would be.

I am aiming for the design that Dud shared. It is the one with 2 pairs of 3 outputs which can be combined into a 1 to 6 multiple using a switch and does not have any LED’s.

Based on a comment by analoginput about putting the resistor inside the feedback loop, I’ve created the following schematic: 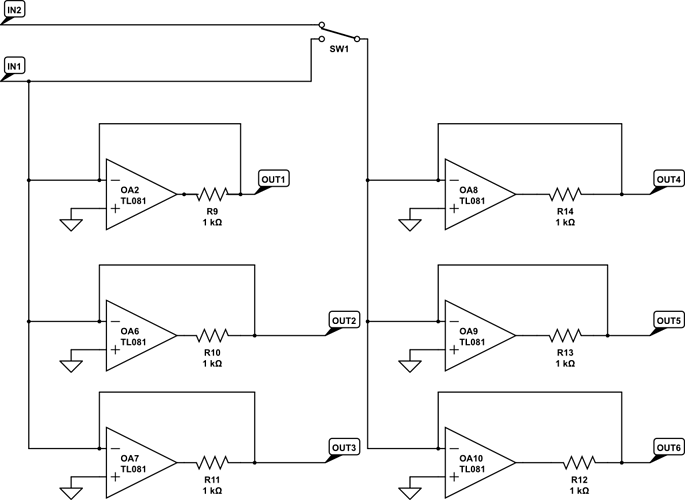 NOTE: I see I accidentally set up my buffers in inverting configuration while this should be non-inverting. This should be fixed but I didn’t have time to update the picture right now.

For simplicity, I left out the power circuitry (discussed at length in the linked topic and here).

The reasoning behind putting the resistors inside the feedback loop is to preserve the exact input voltage (for V/Oct). Otherwise, the 1K resistor as output impedance and an input module with 100K input impedance would give you a 1% error which is noticable for V/Oct CV.

We also ensure that the opamp output still goes through the 1K resistor, so accidentally shorting an output to ground will not cause any meltdowns.

I’m not aware of any downsides of this approach. Would this be the ideal schematic for a buffered multiple?

I happened to edit what I use again today and made it smaller. Instead of the SMD resistors, you can of course also use normal trough holes. Maybe this can help you. 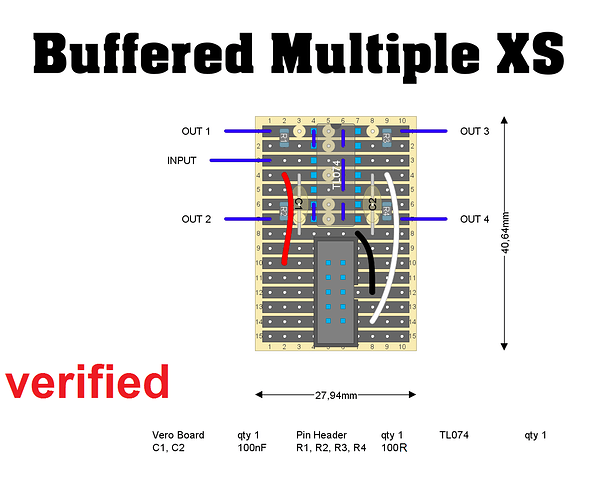 Here’s the schematic of the LMNC buffered multiple: 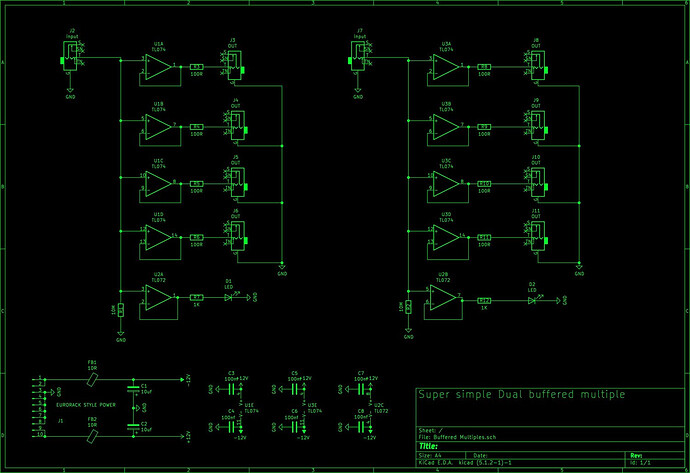 Out-of-loop resistors have the advantage that they help stabilize the op amp against oscillations due to capacitive loads — e.g. if you use a long cable on the output. With in-loop resistors, stabilization requires a capacitor also. That said, such oscillations may not be a significant problem especially with short cable runs. Notice Sam uses 100R outside the loop; into a 100k load, that’s only a 0.1% voltage drop, corresponding to 1.2 cents detuning per octave which should be negligible in most cases.

Sam uses a 10M resistor to ground on the inputs. I think the idea is that it provides a ground connection when nothing is plugged in on the inputs — otherwise the op amp inputs would be floating. 10M is more than high enough to not detune a signal coming through a 1k output resistor. In fact 1M would again contribute only a 0.1% drop.

You could dispense with the switch if you make use of switched input jacks. IN1 tip to IN2 tip switch. Then it’s 2x4 if something is plugged in on IN2, otherwise it’s 1x8.

I can share the schematic I ended up going with. @CTorp actually gave me the same suggestion privately that @analogoutput just suggested which is to get rid of the switch entirely and use switched jacks.

Thanks. This is an incredibly helpful stripboard layout. I created it with the slight variation of adding 1M resistors to ground to prevent the non-inverting inputs from floating. 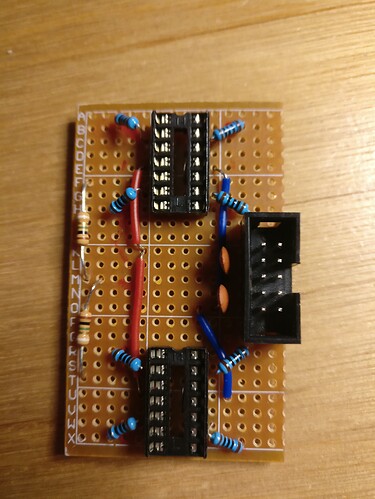 @analogoutput Thanks for your explanation. Highly appreciated!

I already sent an order out for laser-cut front-panel which will have a switch. Next time, I will use the switched input jacks approach for sure since it will save me some front-panel space.

@analogoutput I only noticed that now. Fortunately I did not copy that mistake

Sorry for this dumb mistake , corrected the picture !

corresponding to 1.2 cents detuning per octave which should be negligible

As I understand it, yes and no: A trained ear can hear differences in beat frequencies due to pitch changes of a fraction of a cent in one of two notes being played together. On the other hand, different individual pitches can be discriminated only above about 5 cents difference.

So yes — if you care about the beat frequencies in the music you make, you need sub cent pitch accuracy, so your pitch CVs would have to be 1 V/oct to maybe about a part in 10^4. But that’s not most of us.

I built two of these boards and made them a little smaller to fit into a 1U buff mult module. Thanks so much for posting

Out-of-loop resistors have the advantage that they help stabilize the op amp against oscillations due to capacitive loads — e.g. if you use a long cable on the output. With in-loop resistors, stabilization requires a capacitor also. That said, such oscillations may not be a significant problem especially with short cable runs. Notice Sam uses 100R outside the loop; into a 100k load, that’s only a 0.1% voltage drop, corresponding to 1.2 cents detuning per octave which should be negligible in most cases.

I guess at the time I wrote that I hadn’t absorbed a point Matthew Skala makes: The whole point of the output resistor is to limit current in case the output patch cable gets shorted to ground or a power rail. But assume the output is near 0 V, and the output gets shorted to + or - 12V. Then the power the output resistor is supposed to dissipate is V^2/R = 1.44 W. Your typical 1/4 W resistor isn’t going to be able to handle that, it’ll burn out. You either need a much beefier resistor or, more reasonably, a higher value one, above about 600R. But that will make a reduction in the output voltage which would be audible in the case of V/oct signals. So I now think an in-the-loop resistor, with a suitable capacitor if appropriate, would be a better choice for a buffered multiple or anything that’s intended to output accurate V/oct control voltages.