I figure we should have a room for the unverified Stripboard designs.
It will keep chat more focused and once they have been tested/debugged… well, i shed a tear as it graduates off to the verified room of correctness =)

(i had a look and couldnt see a thread for untested-but-worth-testing schems, you know stuff with potential or ideas that just need a bit of help)

p.s. I dont know how to link to things already posted in a nice format… so post away!

Can the experts @Dud @Caustic @analogoutput @Jos @d42kn355 and everyone i forgot please check to see if there are any errors? 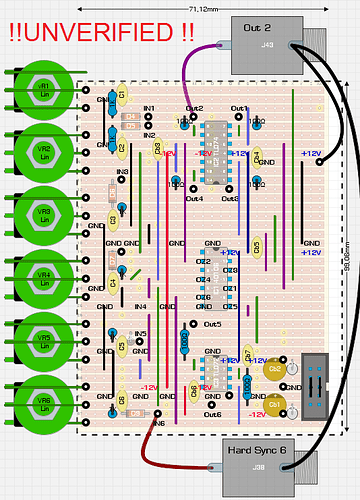 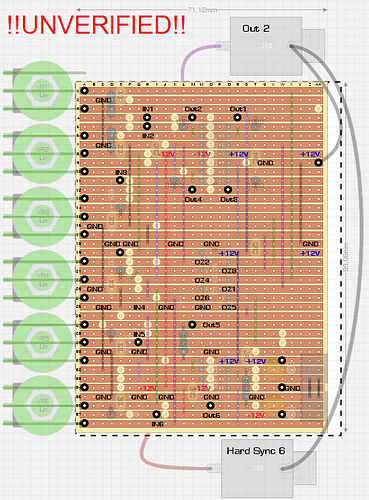 do you have the schematic?
Can’t really check for errors without the original circuit

I’m pretty bad at proofing stripboard layouts. One comment I do have, though, is that using red for -12 V and blue for +12 V is going to confuse a lot of people.

So, perhaps the thread needs to start with “Local accepted standards”

I too struggle verifying stripboard, especialy at home without dual screens.

do you have the schematic?

I get it today and then attach it but basically it’s the Hex oscillator bank by Kristian Blasols Modular in a week with a few changes. In the meantime 2 errors have already been found and fixed, as soon as I get the pictures and the schematic, I will change my first post and give it a notice here.

One comment I do have, though, is that using red for -12 V and blue for +12 V is going to confuse a lot of people.

Yes, definitely! I can fully understand you, the layout isn’t mine either, it’s a friend’s and I don’t know why he did it that way.
Besides, the complete color choice from the first picture is strange in my opinion

I know quite a few people involved in electronics and most of them prefer to think / reason about electronics based on or in terms of ‘schematics’ and not so much in ‘builds’. A strip board being a physical build can have many forms. The arrangement of the components on the board may vary a lot between implementations of the same circuit. This makes it difficult to spot odd things or mistakes in them. Schematics however often stick to the same format (unless you are in the Ciat-Lonbarde corner). So one can see odd things quite quickly. Also to make a mental picture of a circuit from a strip board is not easy. Circuit diagrams are much more suited for that. I personally would have to draw a circuit from the strip board and that would take up quite a lot of time (which to be frank I’d rather spend otherwise).

So to second @d42kn355’s requests, do add a schematic, it will make it more likely that someone can / is willing to help.

(btw he don’t write on it, but that’s a Revision 2, badely his first version was without op amp when i build it at my begining) 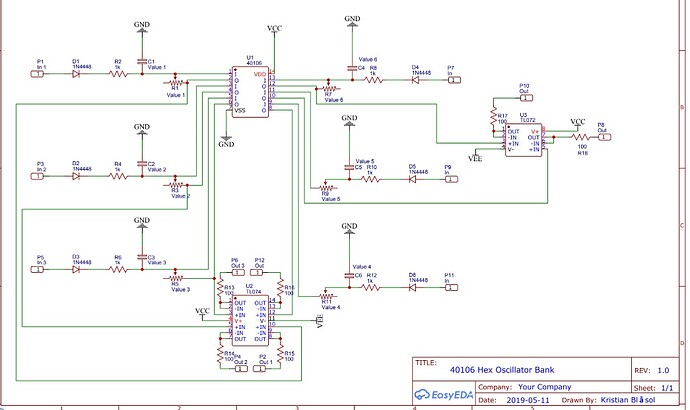 when I did it I rather add switches to connect internally (sync) the osc.
too much jack !
and put big cap for 2 osc to have LFO .
add a vactrol one one osc 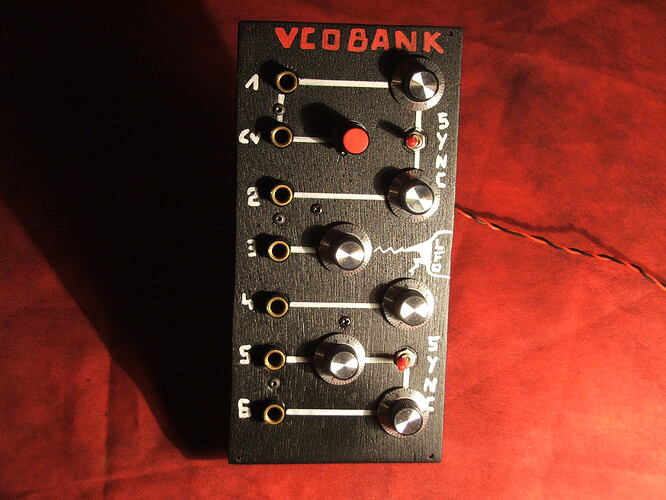 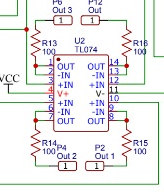 That’s almost as bad as stripboard for understanding a circuit.

And change the name, it’s not a VCO! There’s no voltage control. Oh wait, there IS a CV input on your panel. None in the schematic though.

It reminds me of knobs who used bits of code in pseudo code as short hand when I’m trying to trace the function of an application. (What? Too old school?

That’s almost as bad as stripboard for understanding a circuit.

Yes, the op amps are obscured here by treating the package as a black box.

So glad we’ve got this thread now.

Here’s my attempt at the Skull and Circuits “Follow-Moe” envelope follower. This is hilariously bad. Don’t think I’ll attempt this one any time soon, but if anybody’s up for it… 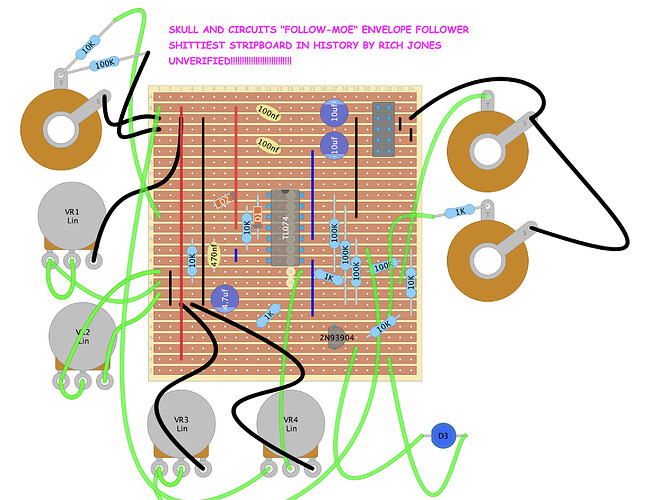 What’s so hilarious about it? I haven’t proofed it carefully but it looks MOSTLY okay to me. BUT it appears you have -12 V going to TL074 pin 10, should be 11.

There are a few unused rows that could be compressed out if you want to make it smaller.

I’d suggest labeling the +12 V and -12 V pins on the power header, and labeling the functions of the jacks and pots.

If you shove two of your 100k resistors one column left, there won’t be that conflict with the 1k.

Adding the BOM would be nice.

Thank you very much for actually proofing it! I’ll incorporate those changes. The original schematic also has what looks to me like a pass-through output, but I chose to omit that since I think that it’d be better just to use a standalone passive multiple to the same effect.

I just think it looks a mess, I haven’t gotten the nack for laying them out yet. For the unverified fuzz module, I started at the input and worked my way through the branching paths, this time I started with the IC and worked my way out. I think I found that slightly easier.

Is there a good strategy for creating these things, like defining a strip in the center as a ground rail and working backwards from there, doing all of the input/output connections to the sides first, etc? I feel like I’m building a lego set with the lights off.

One other note, in the schematic RV3 and RV4 are shown as trimmers rather than panel pots. You might prefer having them on the panel, that’s fine. 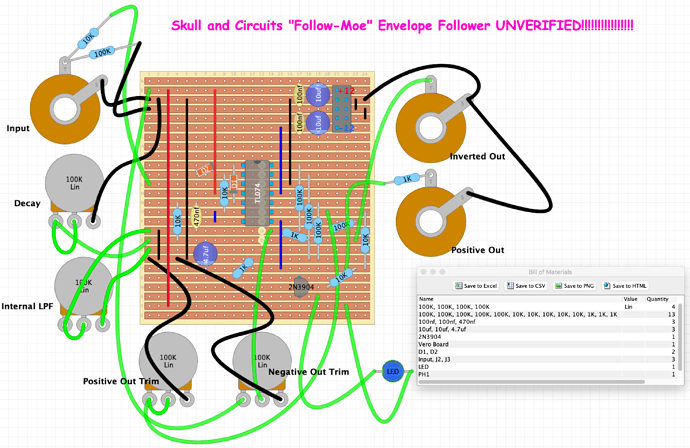 Version 0.2, with your changes attempted. I like having the trimmers on the panel for this one since I think there’s some musical function, like increasing how much a filter opens up as a loop plays, etc. I’ll give it a shot once I finish up all the half-finished PCBs I’ve got sitting around.

Nice work! Again, I haven’t proofed it in detail, but I do suggest that if you’re going to include the bypass capacitors, put them closer to the IC power pins. E.g.:

(Or something like that, there are other ways to do the rearranging.)

@Dud - you are a madman. I love it. Hey, any chance you’ve got one in the archives for a 555 clock/LFO with variable frequency and PWM? I’ve scoured the internet and never found anything I trusted. (Doesn’t need to be stable, I just want to play with both knobs!)

An oscillator: [image] I built this for my workbench, hence the pin sockets for power and outputs, but it could be adapted for synth use. Circuit is the variable waveshape LFO by Kassutronics. I left out the sine shaper for simplicity and I socketed the integrator cap (C5) so I can switch frequency ranges easily — right now it’s 2.2 nF for audio frequency. “Shape” pot varies the width of the pulse output and varies the TRI/RAMP output from sawtooth to triangle to ramp.