The volume out of the low pass filter I finished based on lmnc strip board design is outputting very little volume and was wondering if this is normal and if not what might cause it.

It’s been mentioned before for the PCB version so I suspect it’s also true for the stripboard version. Incidentally, if anyone can suggest a component replacement to boost the out level, that would be swell!

IIRC, there’s no output buffer, just the output from the second filter stage via a 1k resistor, so if you need hotter output, you probably have to add a separate buffer.

The first time I built it it was outputting very little volume and the resonance didn’t work so I just built the strip board again this time using newer transistors and it was like 10x louder. May be worth rebuilding the strip board

I have been having difficulties with the stripboard VCF as well, ihave built it 2x and still no dice. Just to be sure we are aligned , i am building from this layout: 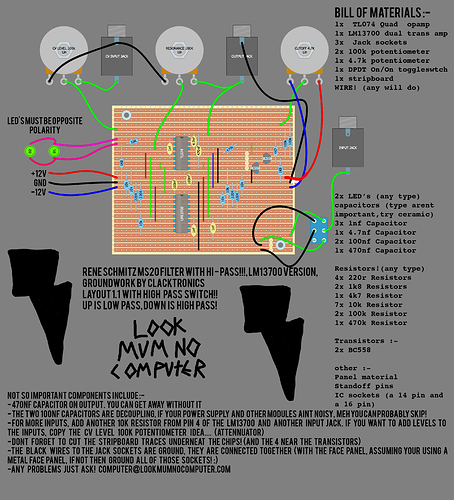 I tried to see if i could fix it on my own, but i think im going to have to ask for help as well. I will be posting some pics soon. If you are building a separate layout, i will make a separate post to keep from confusion.

I did the same layout and when its on high pass it almost seems like it does nothing to the wave.

I did 2 with the version without the hipass / lowpass switch and they work very well. 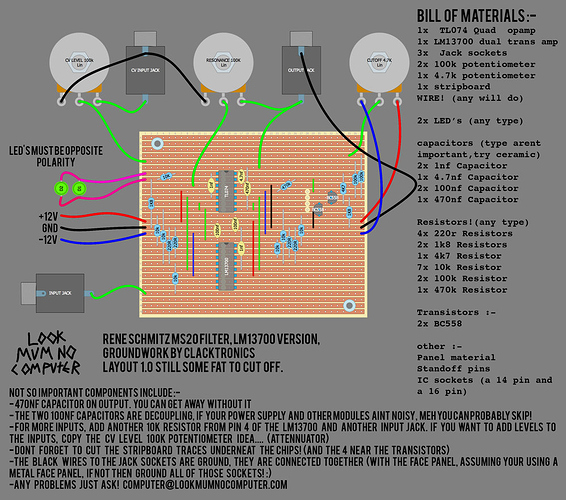 How is the voulme coming of the lowpass filter on yours. Also I have grounded the jacks

Yeah, i ground everything separately, i dont even daisy chain. I will note after the rebuild it doesnt have the same problems. My issues right now are the ranges for cutoffs cause im not using a 4.7k pot. There are a few other things i need to mess about with to see whats up. Never had the issue of low volume though.

Hey, try not powering the module. If i recall, the circuit should still passively output the signal. if thats quiet that might tell us more.

The ones in the exponential converter? That could move the cutoff, but shouldn’t directly impact the output level. Unless what people are seeing is the cutoff being off enough that they’re always inside the stopband? (just thinking out loud here, which is always risky

Yeah, mine (PCB version) is working perfectly, the output volume is just quite low.

My issues right now are the ranges for cutoffs cause im not using a 4.7k pot.

That’s a voltage divider connected to a summing node, so the value shouldn’t matter that much I think (the real MS20 uses 100k, the Schmitz clone a 47k, KS20 a 10k, clacktronics/LMNC a 4.7k).

Is the problem the range or the scaling? If the latter, consider replacing the 100k resistor after the pot with some other value – Schmitz uses 100k for all cutoff CVs which gives them all equal weight, but MS20 and KS20 both use larger resistors for the CV from the cutoff pot.

well I was just using some really old ones (like 10 years) last time and my signal was really quiet then when I ordered some new ones and remade the circuit then it worked fine so probably no correlation but think its what fixed my circuit, couldnt see any other errors in my wiring.

There is a general risk when building a circuit to only look at the strip board. I’d advise to always follow the schematic at the same time, in order to find potential omissions or mistakes. If you do this for a while, you will notice that you will soon not need the stripboard version anymore.

And you should always ask yourself whether the published stripboard version was drawn before the original version was made, or after …

@fredrik Ill give that a try.

@Jos Still getting my legs and intuition with circuit building. All i need is some kinda direction to go in. Good point on referencing the schematic, its a skill i was working on as i build things on stripboard anyways.

Hey sorry i misread your post. Im really having troubles with the range, not the scaling. For instance, the cutoff will not cut everything.

Lol it works like a charm, I accidentally used a black wire for the cutoff that should have gone to -12v so i hooked it up to ground. turns out, you kinda need that ref voltage to get your full range. I swear the previous time i built it i hooked this part correctly but made some other error. now, after combing all of the connections on the board, i noticed that the -12v i was expecting was basically ground i was like whaaat. So yeah, glad that’s sorted.

Awesome. I love that feeling when you’ve been puzzling over something and it finally works!

Well done! Looks good in the rack. Hope you make notes for next one (other than here

Yeah, its either something silly or something hard to fix. Either way you cant beat yourself up about it. If it was silly, you will prolly remember to check that next time, and if it was hard, then of course it took some doing!