This ring modulator is great fun and easy to build. I used the schematic here: https://electro-music.com/forum/topic-45296-0.html&postdays=0&postorder=asc&highlight=

With two oscillators as inputs it does classic atonal ring mod sounds. It also works a treat on drums and if you have a mic it’s lots of fun doing Dalek impersonations. 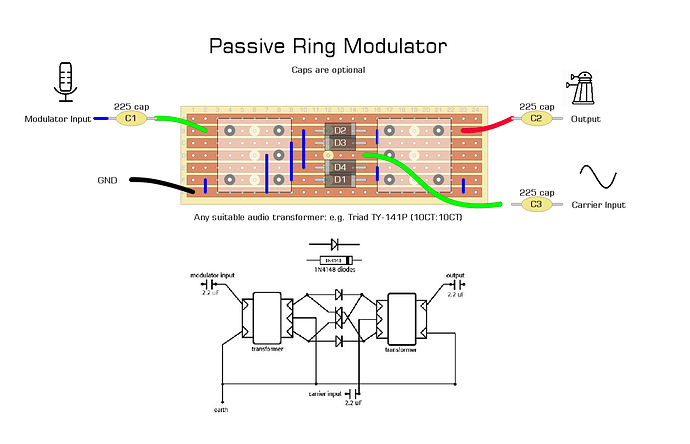 I didn’t have any 2.2uF caps so I left them out and it still works - maybe someone can tell what they are for. 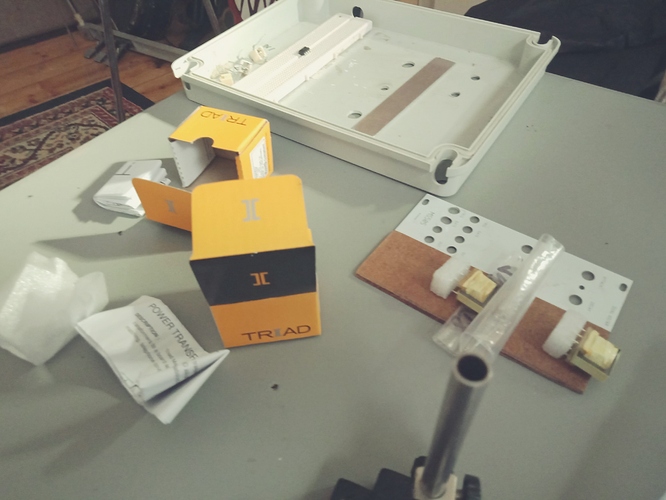 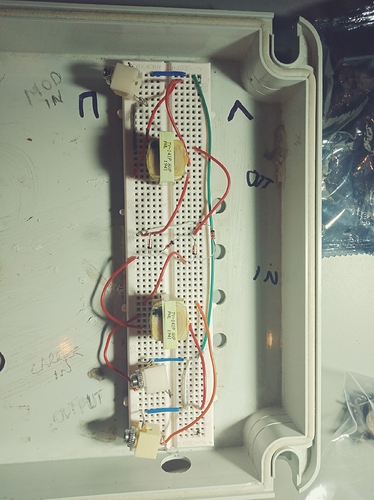 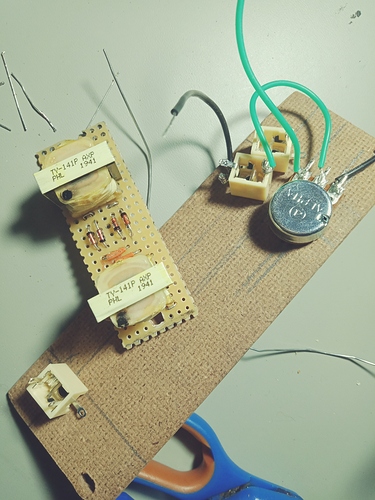 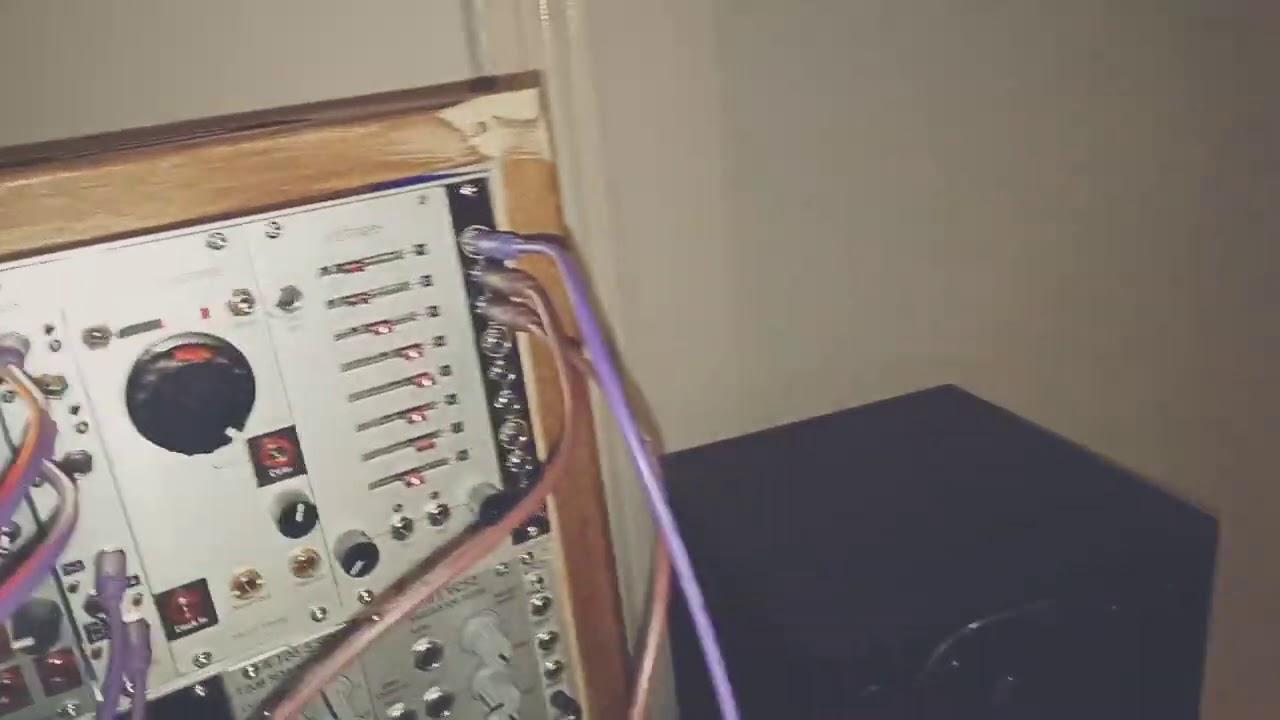 I didn’t have any 2.2uF caps so I left them out and it still works - maybe someone can tell what they are for.

They’re to remove any DC offsets on the inputs and output. Value’s not critical, but they should be non polarized.

Good to know that a smaller capacitor will work. I’ve got lots of smaller value ceramic caps - 2.2uf seemed pretty large to me and the local electronic shop didn’t have any.

I’ll try adding them when the novelty of playing with it wears off!

Off to look for transformers. Or old FM radios I can scavenge from.

Most ceramics are pretty far below 2.2µF. Value’s not critical but should be in the ballpark. You might need NP electrolytics or 1µF poly.

which is cheaper/smaller than non-polarized electrolytics:

but that one’s not very expensive either.

Thanks for these links fredrik.

Next time I do an order I’ll pick up some larger caps.

I loved the 47uf caps you found! I used to have a job where we would discharge massive starter motor caps with a screwdriver -

Exactly what do they mean by an ‘audio’ transformer? And do they have to match?

This is, what I ordered from Mouser (but they are currently out of stock);

Basically If you can’t get the TY-141P transformers then I’m confident that the 42TM018-RC ones will work too as you can see here: 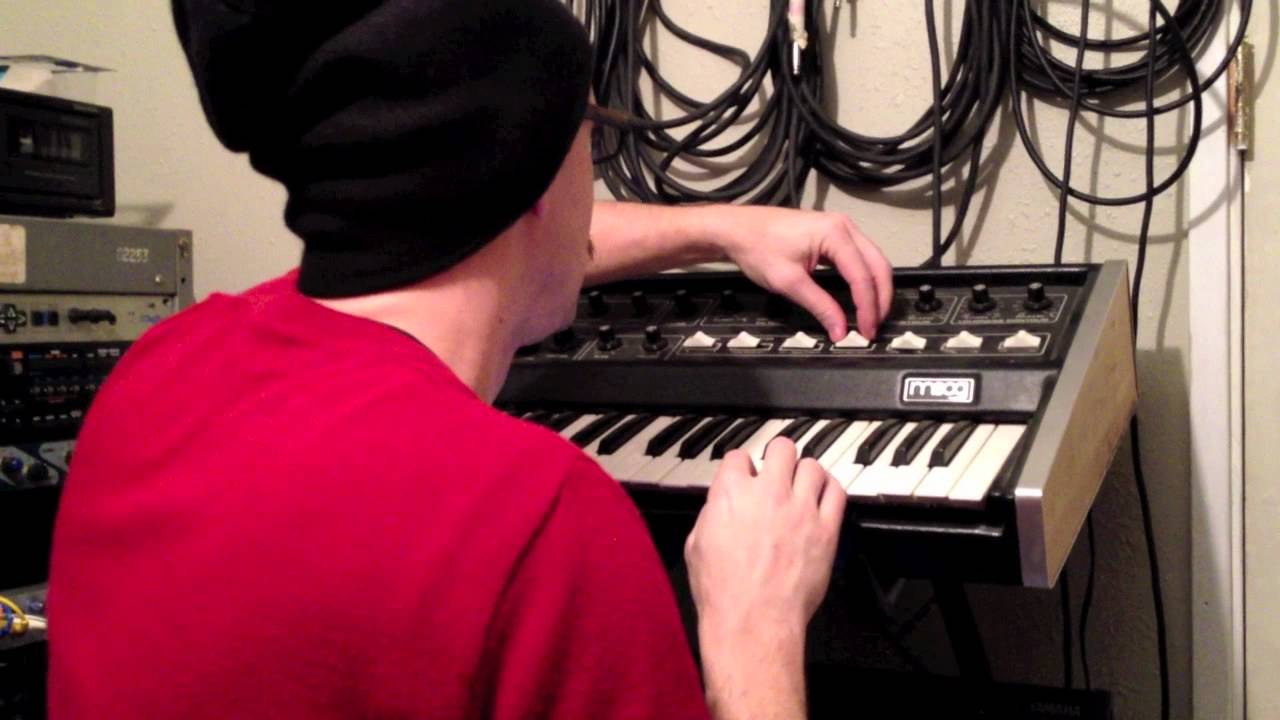 Hi, was googling for a stripboard layout and found this. first post here. Two things to add:

First is that you should try using the “center tap” as the output. see discussion here MASSIVE improvement on Passive Ring Modulator! - MOD WIGGLER

Second, if anyone building this might benefit from the advice from this build guide from North Coast synthesis: https://files.northcoastsynthesis.com/msk-003.pdf

in particular, the author discusses what kinds of diodes and transformers you want. Schottky diode arrays seem to be a good way to go?

Yeah, Schottkys have a low forward voltage which is good in this case. The germanium diodes Skala mentions do too. In fact by my measurements the 1N695 germaniums have a higher forward voltage than 1N5817 Schottkys. Skala does say of Schottkys:

Usually intermediate in price and forward voltage; but normally designed for higher power levels than are typical in an audio ring modulator, and that may have an effect on the sound.

or, I suppose, it may not. Anyway I bought some 1N695 for the RM I’m intending to build.

Me and Dylan and David from the DIY guitar pedal/effects community decided to see for ourselves what the fuzz is about regarding diodes and their “softness”. Why do people like germaniu…

Too many hard-to-distinguish colors on the same plots, unfortunately, but you can kind of puzzle out what’s going on. Here are some germaniums along with 1N5817 Schottky (on the far left), 1N60 Schottky and an alleged 1N34A gemanium from eBay (right of that), the rather germanium-like BAT41 Schottky (the darker blue one starting at about 270 mV — I think!), and 1N4148 (greyish blue starting around 500 mV). 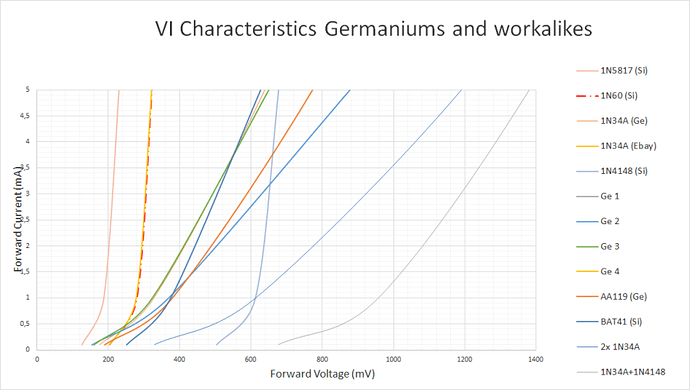 1N5817 is decidedly the lowest forward voltage of these, maybe the “best” for ring modulation in the sense of being closest to an ideal rectifier. The germaniums do have lower forward voltage than most silicon, but they (and the BAT41) also have a shallower slope for a softer cutoff, which some people like in distortion pedals. I plan on germaniums for my RM pretty much just because it’s “traditional”, maybe later I’ll build another with 1N5817 and see which I like better.

Great to see the passive ring modulator circuit is still getting a build or two!

I’d.love to hear so examples of the centre tap, different diodes etc. 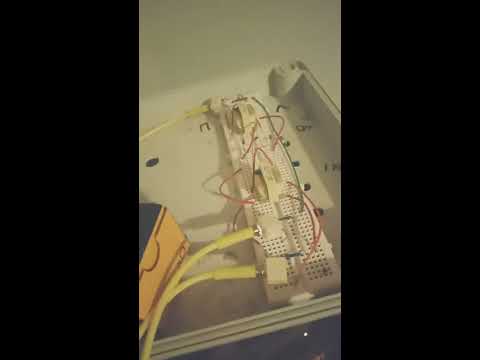 Extermin-ake! Does more than Dalek impersonations. As if you'd need that! Build your own - it's easy - make something! : https://lookmumnocomputer.discourse....

What did u mean with "Any suitable audio transformer?

I can’t remember! I think they had 3 wires on one side and two on the other.

The ones I got were pretty cheap thought. I’ll try to take some pics tomorrow and see if I took any notes at the time.

The circuit works though - and being passive it was an easy build.

M0222 seems relatively hard to source and SP66 is expensive. (Small, though, which may be relevant if you’re building Eurorack.) I found the Triad Magnetics TY-141P appears to have specs similar to the SP66 and is cheaper (though it’s larger) and bought that from DigiKey though I have not yet built the module.

Added: Oh, and since the word “stripboard” is in the topic title: The TY-141P has pins that are too large for at least some stripboards’ holes, and spaced just a little off multiples 0.1". It’s close enough that you might be able to enlarge six stripboard holes to mount each, maybe. I get the impression many transformers are likewise stripboard-unfriendly.

I used the Triad Magnetics TY-141P that Rich mentioned. They worked