Soldered up a bus board. My adaptation of a design by tomarus, using 2x5 box connectors for ±12V and ground, no +5V/CV/Gate. I don’t need twelve connectors on this one so I just populated six. Seems good except that the terminal block footprint could use adjusting to not obscure the connection labels, I’m about to do that. GitHub repo at https://github.com/holmesrichards/busboard. 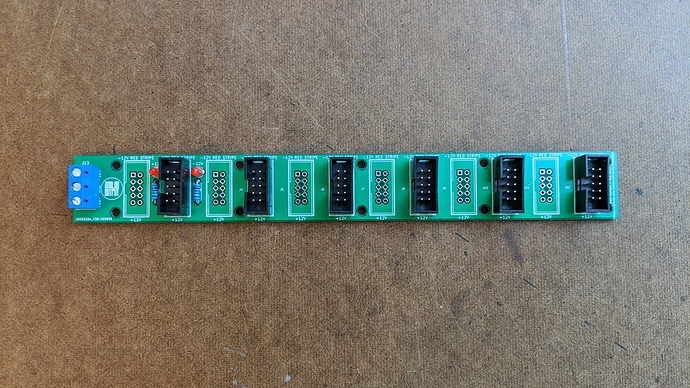 Bumping this thread from the grave!

My box is full, I’m going to have to build another one. I think - by sheer guess - that my current PSU has enough power to drive another box. I don’t want to buy another 25EUR bus board from MSL just to power my modules.

Is there a schematic / best practice for making DIY bus boards? Is there any reason I can’t put a buttload of pin headers on some stripboard?

I know of no reason you shouldn’t do that, and people have.

There are busboard designs that have capacitors between rails and ground, but I’ve never understood there to be a good reason for them. You do want bypass capacitors but they should be close to the circuit, i.e. on the module PCB. Likewise the datasheets say you can (but don’t have to) have caps after the voltage regulators but those should be close to the regulators on the PSU PCB. In between, I know of no added benefit, and “it can’t hurt” is a claim I do not find obviously true.

I like having LEDs on my bus boards though of course they’re not of much use once your case is filled up, and those are easy enough to add to a stripboard design.

I like using a screw terminal block to connect to the PSU, rather than another ribbon cable, but that’s a matter of taste and could also be done on stripboard.

I prefer PCB to stripboard generally, and don’t know of good sources of high quality stripboards long enough to use for bus boards in the US, so I use this PCB design.

Added: There’s also the ‘flying bus board’ which is just a piece of ribbon cable with a bunch of male IDC connectors along its length. Same idea as the stripboard+headers, and they’re commercially available.

Added: There’s also the ‘flying bus board’ which is just a piece of ribbon cable with a bunch of male IDC connectors along its length. Same idea as the stripboard+headers, and they’re commercially available.

Nice, I hadn’t considered this and they’re cheapish on Thonk. Maybe I’ll give that a shot, thanks for the tip!

I would be wary of current limitations with those; the wire’s quite thin gauge and they’re in series, so the segment between the module closest to the power supply and the power supply is carrying the sum of the power draw of each module.

This document shows that the maximum current rating (amount of current to cause a temperature rise of 30 Celsius) for a 28AWG wire (standard IDC gauge) is 0.7A. Since you are using 2 wires in the cable for each power rail, this capacity doubles to 1.4A per rail.

Seeing as a rise of 30°C really is quite a lot, you’ll probably want to keep the total current below 1A per rail. A standard L7812CV outputs a max current of 1.5A so you’ll need to be careful to not plug in too many modules or find a polyfuse that trips when the current reaches 1A.

Compare these results to a 2mm PCB trace on a bus board using this calculator which shows that the max current through the trace using 1oz copper with a ∆T of 10°C is ~4A, way beyond anything a basic MFOS style supply can provide.

I’m not saying don’t do it, but just go canny.