Here’s a comparators module from YuSynth, in Kosmo format. I bought the PCB from Soundtronics and put it behind my own panel. 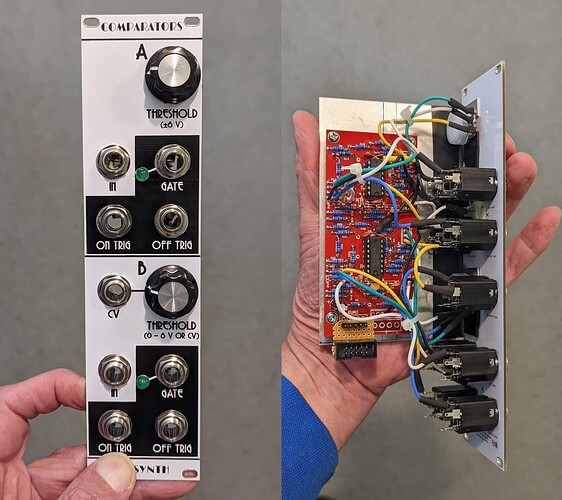 This module has two comparators, each of which takes an input voltage and turns on a gate whenever that voltage is above a threshold. It also puts out a trigger on one output when the voltage goes above threshold, and one on another output when the voltage falls below threshold. The threshold on one comparator can be from -8V to +8V, set using a front panel knob. On the other comparator, the threshold is provided by a CV with an attenuator. That CV is normalled to 8 V so with nothing plugged in, the attenuator knob will set a threshold in the 0–8 V range.

Yves Usson designed this module for ±15 V power. To get the same threshold ranges and output levels with ±12 V I changed some resistor values. I also changed some 12k resistors to 10k, not because they needed to change, but just because I have more 10k resistors than 12k. (They are in pairs whose exact value doesn’t matter, as long as the two are equal.) I considered changing the 10R series resistors on the power rails to 1N5817 Schottky diodes for power reversal protection, but decided to leave them alone since the thresholds and output voltages are sensitive to the power rail voltages. I kludged dual bypass caps from rails to ground in place of Usson’s single caps from one rail to the other, even though it probably doesn’t matter a bit, because I’m like that.

There was a problem with the power header I had to work around.

Another problem I noticed was with the LEDs. The input signal on each channel goes to an inverting op amp comparator: If the signal is above the threshold the op amp output is close to -15 V (in Usson’s design, -12 V in my adaptation) and if it’s below threshold the op amp output is near +15 V. That output goes to op amps that produce the triggers and gate. It also goes via a 1.5k resistor to the cathode of an LED, whose anode is grounded. 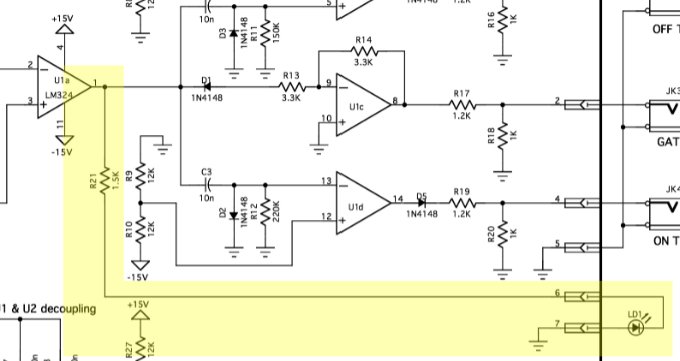 I dealt with this by connecting a 1N4148 diode antiparallel to the LED — anode to cathode and cathode to anode: 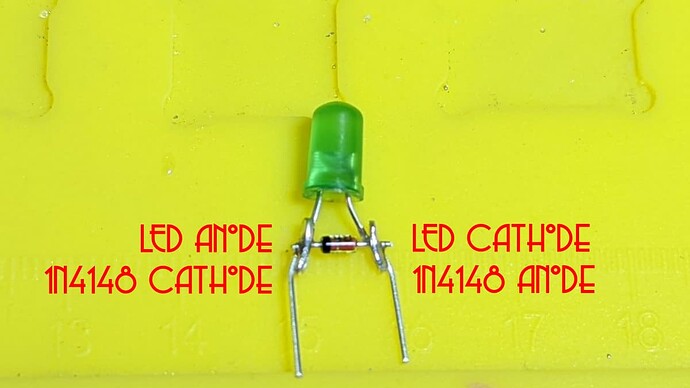 And other than that, the module seems fine and works.

Nice, I had looked at that circuit myself a few months back. I’d have probably used a bipolar LED, but your solution has panache!

I thought about that, in fact that was my first thought, but having the LED always on and just a different color for gate off vs. on didn’t appeal to me — I wanted the LED off when the gate was off.

(So I kind of made my own bipolar.)

I wanted the LED off when the gate was off.