This is a somewhat modified version of Yves Usson’s Fixed Filter Bank module in Kosmo format. 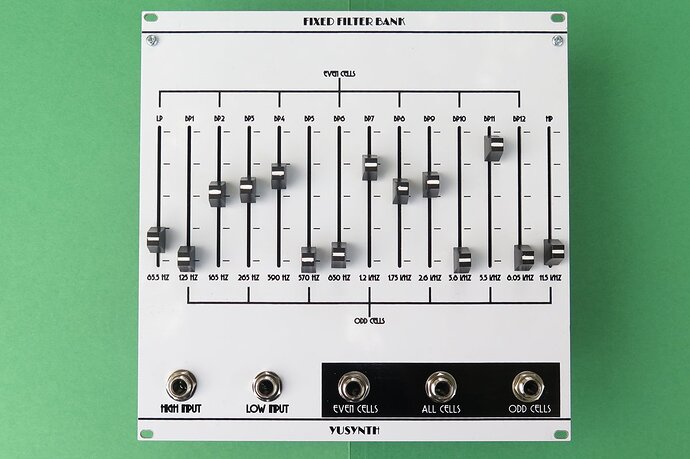 Usson’s FFB’s functionality and front panel design are based heavily on the Moog 914. Both have a low pass filter and a high pass filter, and in between, twelve band pass filters. The input goes in parallel through all fourteen filters and the resulting outputs are mixed to form the module output, with a knob for each filter to attenuate its contribution to the mix. (This sounds rather like a graphic equalizer but, as Usson writes, “it has marked differences. Mainly, the filter [resonance] is higher and the [bandpass] slopes are steeper than in a graphic [equalizer]. Furthermore when a control is set to zero, the corresponding spectral band is completely muted.”)

Internally, though, the Moog and YuSynth FFBs are quite different. The Moog 914 used passive filters made of resistors, capacitors, and inductors — the latter being generally large, hard to find, and expensive parts. Usson instead used active filters, based around op amps, which are much smaller, more readily available, and cheaper.

My version’s changes are:

At 20 cm in both panel dimensions, this is the second largest synth module I’ve built, after the 20 x 40 cm sequencer, and no doubt the highest part count. Gratifyingly, 20 cm is just wide enough for 14 slide pots with only small gaps in between. Moog and Usson (and Behringer and Doepfer and… well, everyone else, looks like) used rotary pots but I felt like going with sliders. Either way, I didn’t feel like wiring up 52 pot and jack terminals, so I did a panel components board.

WARNING! On the first run PCBs (marked Aug 2021, no version number) the power connections to the ICs were reversed. To get around this, install all ICs “backwards”, opposite the direction indicated on the silkscreen. The error has been corrected in the design files — by rerouting the power, not by turning the ICs — and power connections are correct on boards marked v1.0 (Oct 2021) or later. If in doubt use your multimeter before installing ICs to verify +12 V is on pin 4, -12 V is on pin 11. A good idea any time you build a module anyway, especially one with eight ICs!

Usson’s filters are tuned to the same frequencies as in the Moog 914 module, except that for some reason he used 750 Hz instead of 700 Hz. The Moog filter frequencies are about six semitones (half an octave) apart. But note the following observation from the catalog description of the Serge Resonant Equalizer:

Except for the top and bottom frequency bands, all other bands are spaced at an interval of a major seventh. This non-standard spacing avoids the very common effect of an accentuated resonance in one key, as will be the effect from graphic equalizers with octave or third-octave spacing between bands. Spacing by octaves will reinforce a regular overtone structure for one musical key, thereby producing regularly spaced formants accenting a particular tonality. The Resonant Equalizer’s band spacing are much more interesting, producing formant peaks and valleys that are similar to those in acoustic instument sounds.

Following something like this idea, I have retuned Usson’s module. Specifically, the first band pass is kept at 125 Hz and the other filters are tuned at six and a half semitones apart.

In the tuning Usson used, all the required capacitances are non standard values, so he used pairs of standard value capacitors adding to the required value. Note that in this new tuning several of the required capacitances come out to available standard values. For those, only a single capacitor instead of two is used (saving 20 capacitors! Though this is partly offset by my use of dual bypass caps.) The unneeded capacitors are shown (marked DNF, “do not fit”) in the schematic and have footprints on the PCB, in case I or anyone else ever wants to use this board for a differently-tuned version. For a build with my tuning, these footprints should be left unpopulated.

Usson writes: ‘All circuits, schematics, printed circuit board, panel design and associated data published on [yusynth.net] can be used for private use only.’ I do not believe this repo violates his wishes and you are urged to respect them as well. CC0 licensing is intended to cover my modifications and original work, not to negate Usson’s rights regarding his designs.

When planning Kosmodrome, I decided to include a fixed filter bank (FFB). Back in the 1960s and 1970s, pretty much all Moog modulars had an FFB, either the 907 module or its successor the 914. Thes…

Cool! Got a sound demo?

Nothing recorded yet… sooner or later…

This looks really cool, and simply put I want one

Would you mind checking your gerbers on Github please, I was in the process of placing an order with JLC, and may have an issue with the front panel. The preview does not show the text by the right hand side jacks. I also tried with the JLC gerber viewer, but that is unable to render, giving me the spinning clock for over quarter of an hour. 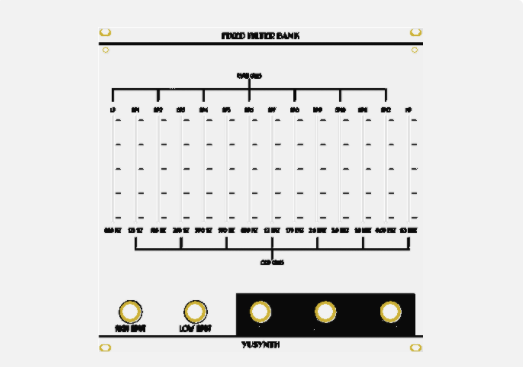 below is the log from the JLC gerber viewer 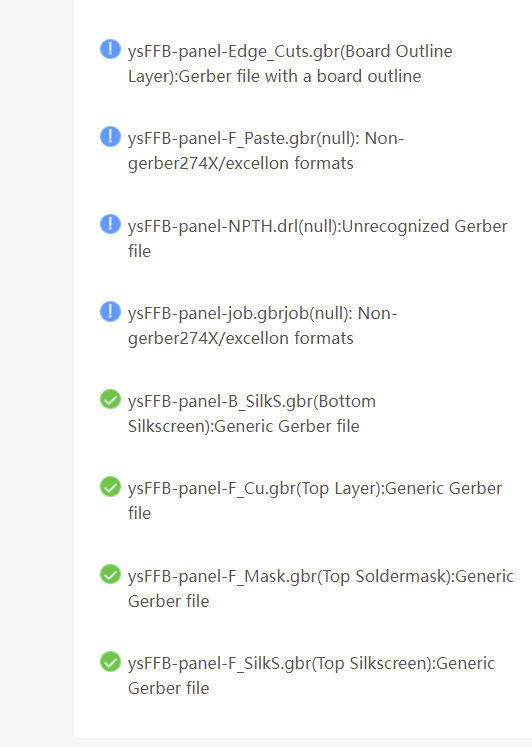 I have not yet tried the other PCB’s

Sorry for this query, however with the cost of these boards and postage being a little on the high side I would like to get the fabrication correct.

[Edit again!] at initial review the main pcb seems ok, but the aux board has no size, and the preview shows differnet sizes for the front and back. 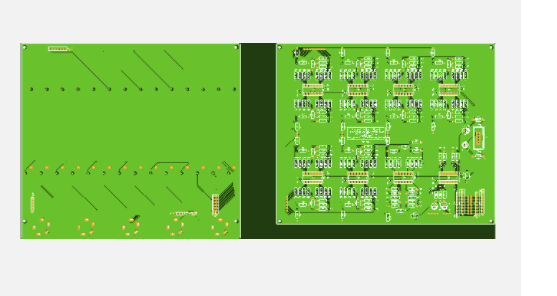 So sorry to be a PITA

OK, try it now. I’d mistakenly included both PCBs in the same Gerber. I fixed that and both appear to load correctly at JLCPCB. As for the panel the white text with black background isn’t evident in the JLCPCB thumbnail and the JLCPCB Gerber viewer doesn’t want to load it, but it does appear in the KiCad Gerber viewer 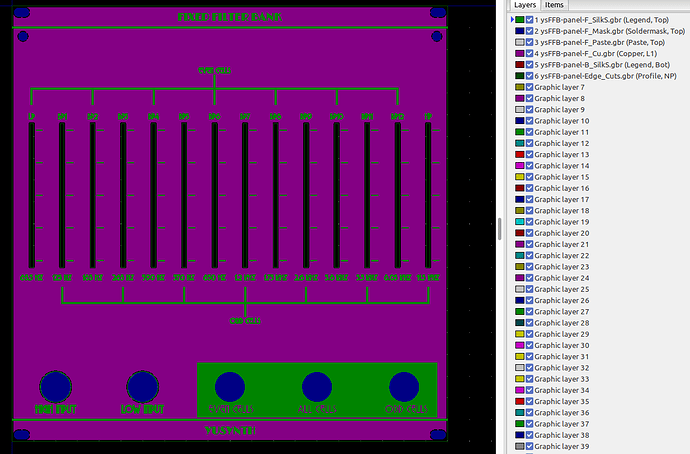 and is in fact the same Gerbers I used for mine. Yes, it’s single sided. That is, the KiCad design is two sided but the Gerbers omit the back layers and specify non plated through holes, because I used aluminum for the panel. If you need two sided and don’t have KiCad let me know.

Thanks for your time, the order has been placed.

I decided to go with the Alu panel, my first time using these, so looking forward to comparing to FR4 panels, seeing as the cost is the same. Also, Alu panels are easier to recycle than FR4 as the copper and fibreglass don’t need to be separated. If these panels are ok, I may change to using them as standard.

I can confirm when I checked my order history the tiny thumbnail shows the correct text, so all good:) 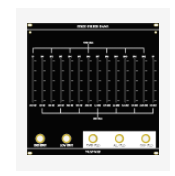 Just a note to anyone fabricating the front panel, to select remove order number, as single-sided I don’t think it can be placed on the back.

If @analogoutput does not mind, I will have some spare sets for those within reasonable postage of the UK.

Just a note to anyone fabricating the front panel, to select remove order number, as single-sided I don’t think it can be placed on the back.

It can — there’s no back copper or solder mask but there is a back silkscreen, and the order number can go there.

If @analogoutput does not mind, I will have some spare sets for those within reasonable postage of the UK.

Boards and panels for Fixed Filter Bank now up SOLD OUT on Tindie Also, lowered prices on remaining stock of other items, take a look…

Video’s finally made and up:

Your quote about the Serge Resonant Fllter is food for thought, though I will probably stick with the Moog/YuSynth frequencies when I get round to completing mine. I am using the YuSynth PCB, but adding a couple of bands and retuning the Hi-pass and Lo-pass filters accordingly.

Brilliant, as always!
Love your work, expertise, and inspiration!

any updates to re-stock of fixed filter bank and panel on tindie possibly soon , love this way it was designed .

I have no plans to do so, maybe someone else would want to run a batch.

thanks had to ask , still a great guy with marvelous toys of synth modules

anyone here gonna try and make a batch for us possibly . Anyone Bueller Bueller. I am not skilled in Gerber lingo

I still have four sets of PCBs with alu front panels spare. The finish on the panels is not great, but if interested I can provide photos. I would be happy to let these go for the cost of postage, as I would be happier to see them used. I am UK based.

yes yes interested I am in the USA San Jose, Ca to be exact and if possible pics of the front panels would be liked by me, I can take 2 sets off your hands or just one set , whatever is best for you. Let me know what is your best choice to do. . Very very interested as of 10/27/22 . I can fund you through Paypal , etc. Wow Analog Output makes some great stuff .