hey guys i wanted to ask you guys a quick question, is it possible to turn this ne555 4017 led chaser into a 8 step cv sequencer? if so how? thank you 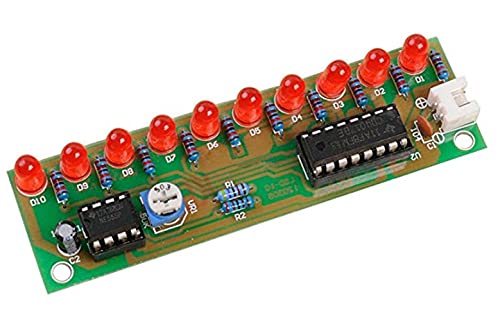 you need to set up a potentiometer as a voltage divider at each of the leds. Connect pin3 of the pot to the led (anode) and pin1 to ground. Then the middle pin is the output of that stage. Put a diode there and connect it to your OUT. Do this for all leds (all connect to the same OUT) . I will make a drawing later

yoo thank you man anyway you could draw it in like a visual form? im not good at schematics lmao

Before: find the point between the chip and the leds: 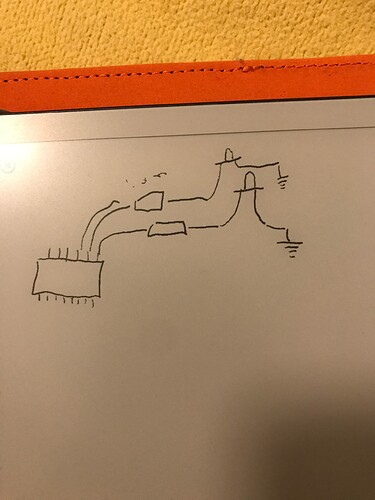 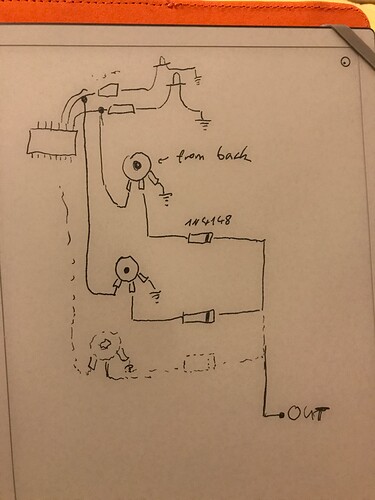 thank you for the visual, i took your idea and made it into a drawing on mspaint
let me know if there are any errors in the circuit. 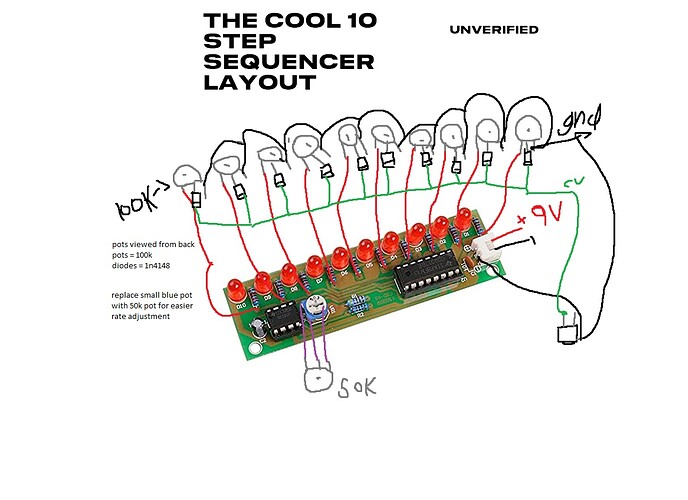 Looks good to me! You might want to add a tl072 buffer at the output (good practice, not necessary needed) and maybe another voltage divider (just two fixed resistors ) to reduce the overall range. 9V means 9 octaves, which makes it hard to get the steps tuned, I guess.

also what does adding a tlo72 o amp do to the circuit? i dont know if it would be neccesary to add an op amp since its just cv out put.

But if the 4017 is powered from 9 V then its outputs are 9 V, and presumably that’s what you get on the pots. Nothing wrong with a 9 octave range if that’s what you want but a voltage divider, or a < 1 gain output op amp stage, would reduce that if it isn’t.

Take a look at http://www.synthpanel.com/modules/cgs42_cv_adapter.html:

This is supposed to be an adapter to convert his gate sequencer into a CV sequencer but it’s essentially exactly what you’re trying to do. It’s powered from 15 V so the output is divided by 3 in the first op amp stage to get a 5 octave range. Another difference is each output is buffered with an NPN transistor before the pot. If you leave the LEDs in place, depending on the LEDs and the resistor used then with the added pots you may draw more current than the 4017 is rated for. With the op amp the pots are only 10k followed by 100k input resistors to the mixer, so current (with 9 V supply) is 9 V/10k = 0.9 mA instead of the 0.09 mA you’d have with 100k pots. That’s below the typical maximum output for the 4017 (2.6 mA at 10 V) but not by a lot and the LEDs very well might draw enough to put you over. In fact in Stone’s gate sequencer the LEDs are driven with transistor buffers too. Of course you could remove the LEDs but that would be no fun.

If you just have a 9V supply then the op amps would have to be something rail to rail (or at least down to 0 V if not up to 9 V), not TL07x.

Maybe this thread can also help you

I try to make schem for an old school Baby 8 seq with a CD4017, with some mix of several schem, and i’m not sure that my mix holds the road . with some on/off/on switch you can on each step select, on/off cv & gate out or choose this step as reset step. i use this part of schem for the external clock in, but only the up part (not the gate to trigger one) and i don’t really know what doing with the pin 2 of opamp, in my schem i only connect it to 100k then +12V [Sans titre] here’s my test on…

Opamp buffer circuits basically make sure you have enough current to drive stuff without a dropout.

It’s all about making sure you supply enough juice. Things like passive multiples work, but they also can dropout and you might get issues when you patch a bunch and not know how to diagnose it.

See @analogoutput answer for the more correct and complete answer as always.

OHHHHH ok that makes alot of sense now, thank you analog output and caustic for that, do you think a buffer circuit like this could work?

No. This might work for buffering a small audio signal, where you can capacitively couple it and add a 4.5 V bias, but not for your application. Your CV is essentially a sequence of DC voltages, so you can’t use capacitive coupling. And it’s several volts, adding a 4.5 V bias and expecting a 9 V powered TL07x to handle that isn’t going to work. Lastly there should be a 1k current limiting resistor on the output. See above design by Ken Stone for a reasonable approach.

You’ll also have to connect output 8 (pin 9) to the reset input (pin 15) to turn the 10 step sequencer into an 8 step sequencer.
Alternatively, you can use a multi pole switch to select which output to connect to the reset input and get a variable length sequencer.
Step 0 will be marginally shorter than the other steps but it shouldn’t be audible. (Less than 1 microsecond difference.)