I’ve built the 1V/Oct VCO as built by Sam, including the pulse extension: STUFF - LOOK MUM NO COMPUTER
And I immediately ran into the pitch change issue caused by changing the pulse-width knob, which I found a few threads about. However, since I’m a beginner, I didn’t manage to actually fixed the issue using the information I was able to find.

It was mentioned in this thread and I built the circuitry that connects to pin 3 and 4, but no luck. I believe a CEM3340 was used by the topic starter rather than my AS3340.
https://www.muffwiggler.com/forum/viewtopic.php?f=17&t=231130

I have also found this fix by the manufacturer: http://www.alfarzpp.lv/eng/sc/AS3340%20tip%20VCO%20_%20PWM%20.pdf
However, it is not clear to me what kind of zener diode I have to use in the schematics and whether I can use other transistors as well. I don’t have the ones that were described and they don’t seem easily available to me.

I dont want to goof around too much since I’m afraid I will break my AS3340’s. Already fried one. Can somebody with more knowledge explain to me how Sams circuit can be adapted to fix this issue? If we could put up a schematic somewhere with this issue fixed it would help a lot of new people who are trying to build a robust VCO

Thank you very much!

This is a long-standing issue with this particular chip, and has been discussed at some length in other topics both here and elsewhere. It boils down to being a design flaw in the chip itself, or you could consider it part of the character of the oscillator. Basically the 3340 (both from CEM and AS) is very sensitive to varying current at the inputs (there is a specific pin that escapes my memory right now that causes this particular drift). It can be remedied by using a precision voltage regulator to provide current to the offending input (as seen in the Fonik version of Thomas Henry’s VCO Maximus for euro rack) or by swapping out the chip itself for the AS3340HYB (a variant that is designed as a drop in replacement with the bug fixed internally) although I have yet to actually try that one myself.

If this problem come from the chip, there’s somewhere a solution because all mine don’t do that.

a lot of thread about CEM/AS but maybe this one can be a way ?

It’s dependant on the power supply, power input conditioning and the signal chain to the PW/PWM inputs where even the tiniest extra resistance in the design can start to throw it out. Using a 10r resistor on Sam’s performance VCO rather than a jumper can cause it if your resistor is a little off it’s listed value due to standard precision variations between resistors. It also differs chip to chip depending on QA.

It also is much less pronounced/much more forgiving at +/-15v, which is why the data sheet specifies that as the correct operating voltage (hence more sensitive chips passing their QA). It contributes to the almost ‘sloppy’ analog feel you get out of the classic synths that used them back in the 80’s.

The easiest fix should be to use the AS3340HYB, but I have yet to find anyone who has done it. On my Performance VCO’s I just live with it, and my other 3340’s are based on the Maximus design with a precision voltage regulator on the negative supply, which also compensates for it.

Thanks for all the comments.

and my other 3340’s are based on the Maximus design with a precision voltage regulator on the negative supply, which also compensates for it.

In the datasheet it says that the negative supply can be between -4.5V and -18V but I’ve read that it should always be at -5V. Pin 3 is at -7.28V for me, which I might be able to correct with resistors, but a voltage regulator is probably a better fix given that might PSU might swing slightly here and there. I would like to give that a go.

I’m not too familiar with voltage regulators, but would something like an LM7905 work? Can I just replace the 620 ohm resistor to pin 3 with the output of this regulator?

On the VCO Maximus you use a TL431 Precision Shunt Regulator, which is a ‘programmable’ voltage regulator, but its implementation is complicated. If you use a standard 7905 you might get better results, but then you might also have temperature related weirdness, as you need the most stable supply possible, and you also need to make sure that the current supplied to the pin is constant and stable too, which is a whole different kettle of fish. Either way you wouldn’t want to drop the resistor there entirely, but it will likely need to be changed to a different value to get good results. What value I couldn’t tell you.

Considering that the AS3340HYB is ~£12 I would really recommend trying that before you spend days of your time trying to implement something complex and would require a lot of debugging and extra componants, especially since nobody else here has actually gone to the effort of building that circuit from scratch. My TH Maximus VCO’s are literally the Fonik PCB with all the mods pre-worked into the board, but even then the instructions for building it are like ‘We know this is a problem, here is a litst of options that might work with your setup. Try these things and stick with what you think works best’. It also recommends that you use a decent professionally made linear power supply to get the chip working at its best. Sam’s stripboard VCO is only the simplest possible implementation of this kind of VCO, so the extra work here is probably not the best use of your time.

Or just forget the AS3340 PWM and implement square out with PWM using a comparator on the saw output…
Has already been done, just search for it.

Yeah. I realize that I’m not experienced enough and it is also not worth it.

Or just forget the AS3340 PWM and implement square out with PWM using a comparator on the saw output… Has already been done, just search for it.

I love that idea. I do think I’m able to design that myself with an opamp. Already halfway a design in circuitlab. Will compare notes with existing solutions. Thanks for this suggestion!

The easiest fix should be to use the AS3340HYB, but I have yet to find anyone who has done it.

@ChristianBloch i believe used the HYBs, and confirmed they fixed the issue. Could have been somebody else though…

Where would you suggest buying the AS3340HYB? I looked online and online found one vendor that sells it, infinitemachinery.com. The picture of the chip was unusual and the price tag was quite a bit higher than the standard AS3340. 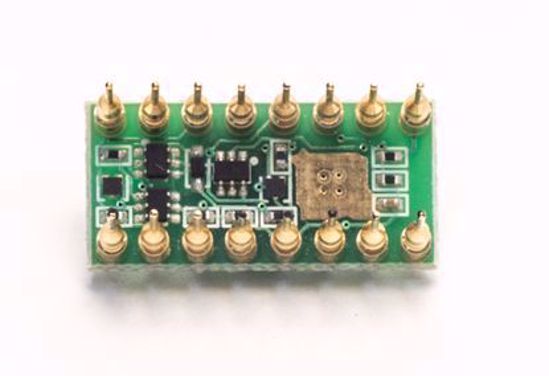 Yes, it’s an AS3340 variant (AS3345F) in a surface mount package, mounted along with other components on a PCB with pins for through hole mounting the whole thing.

Basically pin compatible with the DIP AS3340 and yes, it’ll cost significantly more.

Apparently its main advantage is it “greatly minimize[s] frequency modulation by PWM control circuit”. But I don’t find PW pitch shift to be significant with an AS3340A powered with regulated -5 V.