From the My build progress topic:

I have from time to time, one of my cases which at start-up does not light up the -12V led, I turn it off and turn on it again and everything is fine.

and a couple more people spoke up saying they’d had similar issues with Frequency Central/MFOS style wall wart supplies. Seems worth breaking out to its own topic.

It does seem it’s the regulator shutting down due to overcurrent, probably associated with a capacitor which once it starts charging up pulls less of a load, so that restarting is successful.

Is it the 10µF (or whatever) bypass capacitors on the module power rails? Is it a cap in the PSU itself?

Do 10R resistors vs. diodes vs. whatever in series on the rails in the modules make a difference?

Could it be 10 µF caps quality or specs are relevant? Are some caps better than others for this?

How widespread is this behavior? Certainly @lookmumnocomputer uses a lot of these type of PSUs, has he seen this happen? Who else has? Anyone found a cure?

My post from the build progress thread, to keep the information collated.

I do use diodes in series and not 10R resistors, could that make the difference?

That is a similarity between us, well on my own modules I do, 10-ohm resistors when specified by others.

The difference is my -12v rails are fine, will always be the +12v rail that requires a repower. I get the same on all 5 of my PSU’s, but not normally at the same time, and only once or twice a week.

Which current can your regulators (7812/7912) deliver? Most types can deliver 1A or 1.5A, maybe its too much, depending on the count of modules and how much capacitors have to be charged on power on.
I’ve build a mfos similar PSU which is powering about 10 module at the moment and had never such problems, but I’m drawing only 200mA per rail.

@Dave normally your +12v rail needs to deliver more current, so this could be reason. How much modules are connected in parallel?
The only module which draws much more current on the negative rail ist the safety valve, with the heating connected to -12V.

I’m seeing this on a PSU supplying about 6 modules, none of which I’d expect to be drawing a very large amount of current although I don’t have measurements for all of them at the moment.

In any case it doesn’t seem to have to do with steady state current but just what’s happening on startup.

normally your +12v rail needs to deliver more current, so this could be reason. How much modules are connected in parallel?

The PSU’s I use are all Frequency central, with 7812, 7912 regulators with the provided heatsinks fitted. the PSU’s are rated 500mA per rail. Each supplies 600mm of modules, between 5 & 7 modules. The modules when tested in isolation on the bench have a maximum draw of 50mA each on the +12 rail, some as low as 17mA. I only have 2 modules that require more power, the 1222 Performace VCO’s, iirc they draw 90mA on the +12 rail. I have not measured the combined loads, but from the bench measurements, 4 of my psu’s should have a maximum draw of 250mA, with the other closer to 375mA on the +12 rail, less on the -12.

Im guessing at figures, but I think I get issues about 1 in 10 times I power up, so each PSU probably fails 1 in 50 times. I have noted the 3 of us that have noticed this have multiple supplies, not sure if this is related, or we just get to see it more often. 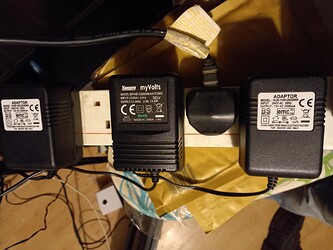 I have noted the 3 of us that have noticed this have multiple supplies, not sure if this is related, or we just get to see it more often.

In fact part of the reason I have two PSUs in the Kosmodrome case is because I was seeing this behavior with one PSU and thought maybe dividing the load between two would prevent it. And maybe it did decrease the frequency of the problem or did allow adding more modules but I haven’t kept careful track — anyway I saw it when I was using one and I’m seeing it when I use two.

I have 2 FC PSU in parallel in each box, and the same thing in all the boxes, each box has the same wallwarts. But I only have this problem in some cases. Rather in the last ones that I did with yes a lot more modules than in the first ones.

I have 4 PSUs based on the FC approach or very similar. Each has its own double output transformer, bridge rectifier and a stack of elco’s. I do not have any series resistor between the 3 * 4700 muF (which is quite a lot) elco’s and the bridge rectifier. I’ve not had any problems yet. The FC PSU design looks sound, the only minor point maybe is that the 5V supply is low current and the power dissipation of the 5V part is high because the 78LM05 is fed a rather high DC voltage. Because of the heat I replaced it with a bigger type 7805 and in one case I used a DC-DC converter to convert the voltage fed into the 7805 from (I think) 18 V to 7 V to lower the dissipation. No problems there yet.

I have 3 FC PSU’S with (2) 2 amp wallwarts and a 1 amp which I can start up one at a time. Still have the startup problem. I have tried dividing the load some.

Nice to have a thread for this.
I have had this issue on my second case with a home made -12/+12v ac to dc converter (unresolved) and I decided to add an extra psu.
The fact that (at least for me) it works right after I switch it on and off and on again makes me wondering about the charging of the capacitors. Could it be that the ground is not centered (maybe too positive) at the start and it then leads to a poorly charging of the positive rail.

I just found this thread by accident. Luckily I don’t have such issues yet. I use a ring transformer and a simple 7812/7912 circuit. I power 14 modules and each of them have 10uF bypass caps on both rails.

I suspect it’s the inrush current. You could try to add an NTC, which is a fairly common solution to limit this current. At least it would be worth a try…

Thanks for the suggestion, I had to do some googling, as I was not aware of NTC’s before reading your post. I have added a couple to my next order, at about £1.50 each they are worth a try. Having read about the heat generated, I assume I should mount on a piece of stripboard located between the wall wart and the PSU pcb, as temperatures up to 175 celsius sound a lot to just soldier inline with the cable.

I have been keeping track of how often this happens, It in the region of 1 psu fails to boot every 20 powerups, so it may take me some time to report any improvements.

I have seen it on my FC, but not on my own design which has a beefy mains transformer built in.

Is that this one? GitHub - twinturbo/KOSMOPSU: This is a KICAD PCB Design to build a mains to +12V -12V Power supply for analogue synthesizers I guess you’ve had that a year or so now, any issues? I might look into building something based on that.

Not sure the beefiness of the transformer is the relevant thing, though. Would undersupplying the PSU cause a regulator to shut down? I don’t know, maybe. But one other thing I see there is you have only 1000 µF on each rail. There was some discussion of that here with @feralbeagle saying the 10,000 µF or more of the MFOS or FC wall wart supply was too large (bad for the diodes) and suggesting 3300 µF. And you went even lower.

The other difference is your transformer is center tapped, and you have a full wave rectifier. There again I don’t know if that’s relevant but it is a point of difference.

By the way, I spotted an issue on your PCB: 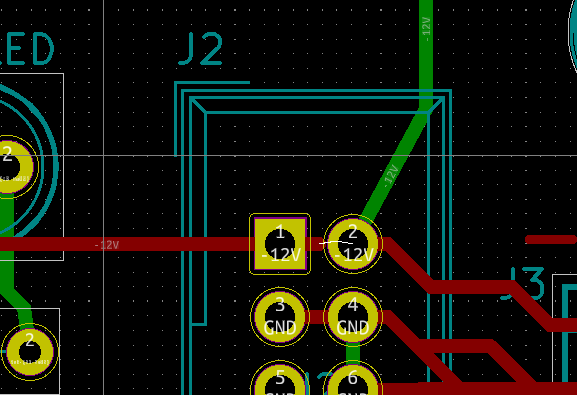 No connection across the power header for the -12V rail.

Good Spot, I had been reworking the board at some point with a few tweaks, had not clocked that one.

Yes, the old version works just fine, big test will be next week when I can get it powered up on all 20ish modules now my case is done and I have just built loads of cables today.

If It can’t cope I have a spare transformer and other parts to build another one.

Huh, I just found this sentence:

If you fit a too small VA transformer it will saturate and the regulator will drop out.

No. These figures are AC rms, the voltage has to be multiplied by root2 to get the peak and the current has to be divided by root2.
If you want +/-12V @ 1.5A that means you want 36W maximum. At 50% efficiency (which is about right for a linear regulator) you need a 72W transformer so a 50VA is not going to deliver. 80VA is marginal, don’t forget that it is conducting for less than 50% of the full cycle. Don’t forget that mains variations and transformer regulation have to be taken into account too.

Hey, sorry to revive this old thread but I’m also looking for a solution to this… it’s my last issue to resolve with my recent modular project.

Has anyone found any solutions? Did the NTCs help @Dave ?

Edit - I’ve just seen this post over on another forum… do you think replacing d5 and d6 with Schottky diodes could help?

I never did fit the NTC’s, but I have drastically reduced the occurrences, but not eliminated by changing the power strip I plug the wall warts into. It now only occurs once every few weeks. I have no idea why this has made the improvement, but I have decided to just live with it.

Thanks for posting this. I will definitely try this diode.

Let me know if you have any luck!