Well, hopefully this will inspire me to finally get some more solder melting and catch up on my module backlog: 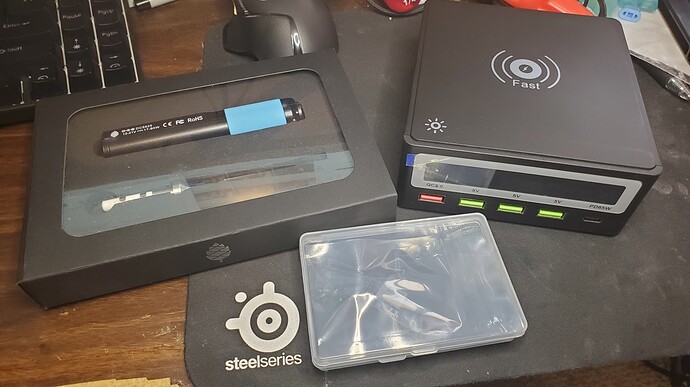 I still love my TS100 but at $25 the pinecil seemed like a great lower cost improved version of the TS100. First impression - it is. It’s a little bigger, but it adds USB-C for power while retaining the barrel jack of the TS-100. It also adds some little “legs” on the bottom so it can sit without a stand, it runs a slightly custom version of the IronOS firmware, and while it still uses a screw to retain the tips like the TS100 it uses a phillips instead of a super tiny hex head. (In generaly I prefer hex heads…but at that scale…it’s just too damn fiddly!)

The Pine power supply was a bit of an impulse item…It was $35 which still seemed like a really good deal…and given the number of times I plug things into USB ports just for power it seemed like it may be a nice addition to my desk. Add in the USB-C PD port and USB 3.0 QC ports…and the v/a display and the QI wireless charging on top (which I didn’t even realize it had) and I figured I couldn’t pass it up. 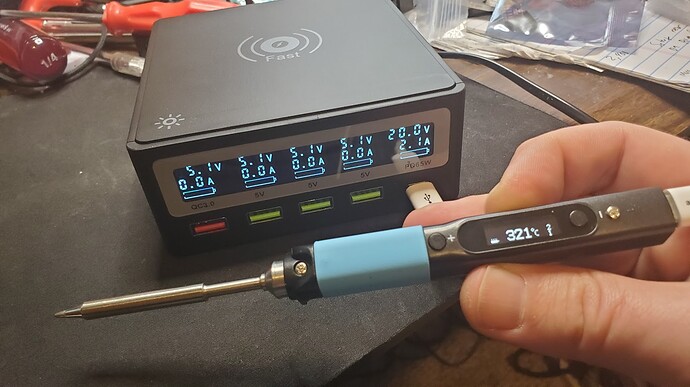 Initial impression is very positive. I’m not huge on the slightly larger body of the pinecil…but the rubber grip is kind of nice. And running at 20v over USB-C it seems to heat up quicker than my TS-100 does on the 19v wall wart I use with it. The USB-C PD cord I had on hand is also way more flexible than the power cord on the wall wart for my TS-100 and longer so that’s nice.

Downsides - There is no USB-C cord or wall wart included, but for $25 I can hardly complain about that. Also there is no documentation. Thankfully there’s quite a bit of info about IronOS out there and it’s fairly intuitive. Definitely has more firmware features than my TS-100 (though the TS-100 could also run IronOS if I bothered to flash it.) The stock tip they include isn’t my favorite…it’s a fairly thick conical tip…I prefer a chisel…I’ll probably put the tip from the TS-100 on here for now.

The power supply, I have zero complaints about…it seems to work and work well. I have two little arduino projects I’ve been working on plugged into it, and my phone charging on the QI pad and can still run the pinecil no problem. Nice…and I’m only using 1 - 110v outlet to do it while before I was using 3 to do the same - win!

Oh - and the little plastic box in front - a “Pinenut” board since Pine is offering them free with all orders through the end of the month. It’s kind of like an ESP8266 in theory…but apparently only exposes 3 (or maybe 5 if the RX/TX pins can be remapped) I/O pins. And there’s apparently no documentation for it that I can find. But for free I figured it may be fun since I’ve been doing a bunch of experimenting with ESP8266 and ESP32 boards the past month or so.

One last issue - apparently both the Pinecil and the powersupply are currently sold out. But they seem to restock and then sell out again quickly…so if you’re interested I’d say just keep checking the links.

So…maybe tonight I’ll finally get a few of my K2.5 modules built

I’ve been doing a bunch of experimenting with ESP8266 and ESP32 boards the past month or so.

Nothing much to get excited about. And I don’t want to take this thread off track. Basically I learned about the <$30 PMS5003 sensor for detecting particulate matter in air and picked one up on banggood on sale for just $15. And years ago before arduino make microcontrollers easy I had rigged up a bunch of Dallas 1-wire sensors around my house…but wire length was an issue and without a cheap microcontroller keeping them logging full time was a pain. So I started playing with the PMS5003 on an arduino since our area is a PM10 non-attainment zone and I was curious how the outside air quality compared to the inside air quality. I also got some cheap CO2 sensors, VOC sensors, DHT22 sensors to replace my old Dallas 1-wires since they also do humidity…and I’m still waiting on an ozone sensor.

My original plan was to hook them all up with an arduino and a little screen with some kind of UI. But then I started thinking it would be fun to have more than one so I could compare inside/outside sensor readings and different rooms of my house. So I ordered some cheap NRF24L01 RF modules…and then remembered about the ESP based boards and since my day job is doing backend web development thought they may be fun to try instead of an arduino…and then I could build and interface with HTML/JS and not have to deal with the NRF’s just have some cheap ESP boards with sensors scattered across my property feeding JSON data back to my server where I can store it and graph it and share it and such.

So…that’s kind of what I’ve been spending most of my free time on the past few weeks since I’m in a funk musically. It’s been interesting…and I’ve been trying to think of some neat ways to use them in a module…like maybe tweaking one of the spare dual quantitizers I have to use an ESP board instead of an arduino nano so you can change and define scales from a web interface.

And the PM sensor is really neat. It’s definitely convinced me I need to build a fume extractor since it goes bonkers when I melt solder. And it’s made me feel a lot better about using my 3D printer while I’m in the room since with the simple partial enclosure I have around it PM levels in my room don’t change at all when I’m printing…and at the bottom of the enclosure don’t really change…but at the top (I keep the top of the enclosure open most of the time) they do go up when I print. But no worse than they do when I cook dinner two rooms away…and they fall quickly when I stop printing…but when I cook dinner it takes a few hours for the PM levels to drop down after. Also I found that as expected windy days to make our PM levels go up outside…but unexpectedly learned that they also drop very quickly when the wind calms down…like in a matter of minutes not hours…which isn’t what I expected.

Now I’m really curious about replacing the nano in a quantitizer with an ESP…Maybe I’ll finally build one of the quantitizers tonight instead of a few K2.5 modules

Interesting stuff. Many thanks.

A new toy arrived today for me to play with. 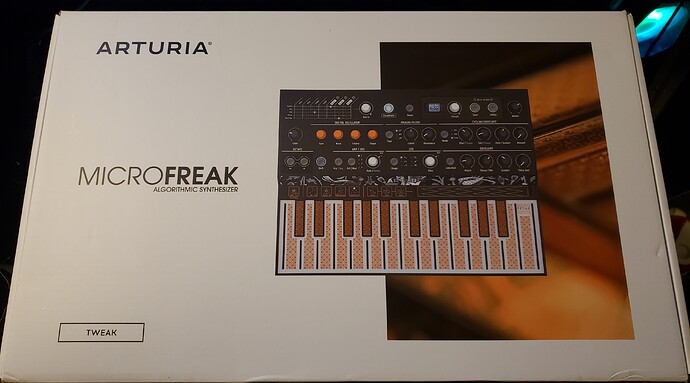 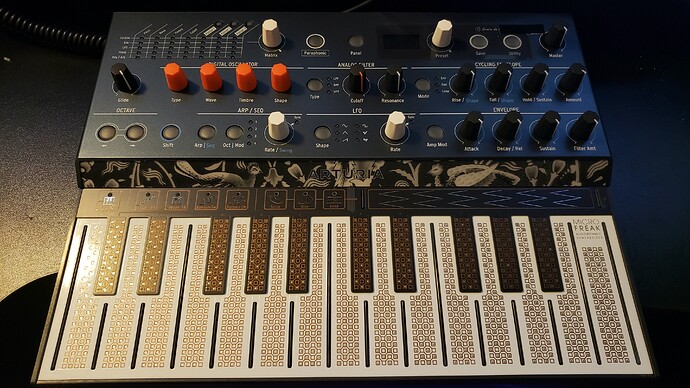 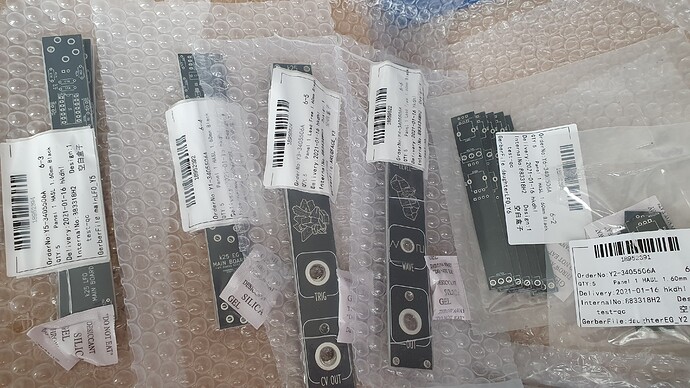 My first JCLPCB order arrived today: the LFO and EG of the k25 series

I looked on JLCPCB on Thursday and the tracking number for my boards said they had tied to deliver but nobody was home ( Err, 3 of the family were home ) but there was no drop Card??. I booked re-delivery on line for today, no delivery, no drop card, no update on line…

I did get something nice in the mail, but forgot to take a picture before leaving my workshop… 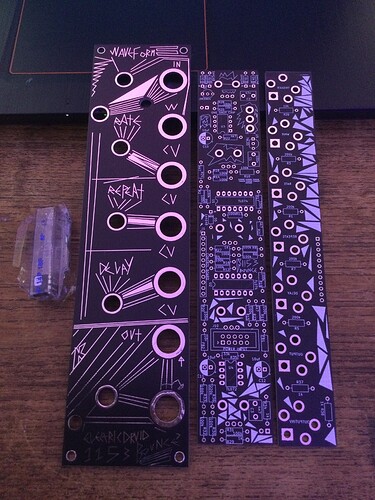 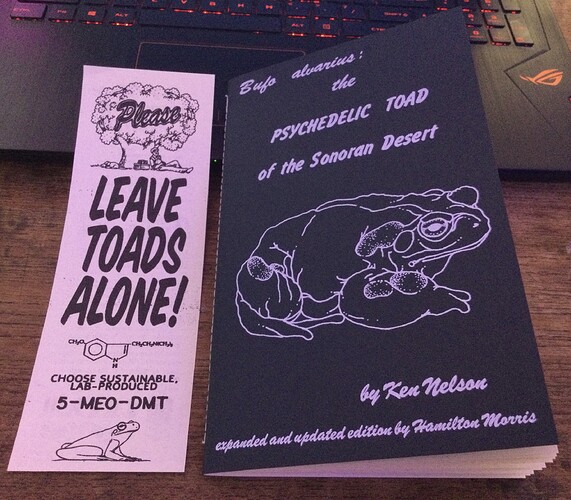 I saw a guy “milk” a bufotoad at a party once. Seemed like kind of a violent process, very uncool to watch. I left. Not a fan.

In other news, my LMNC modules fucking finally showed up! I ordered them in November! Faen ta Posten. Unfortunately… the VCOs weren’t included.

Now I can do everything I’d ever possibly want to do… besides make notes. Goddammit.

To quote a great bluesman “can you hum?”

Well, no, but I’ve got a guitar and enough TL072s to bring it up to synth level.

JFDI @BlackDeath. JFDI
I’m on a near permanent search for a cheap throat Mic as my piezo makes were sh1te.

Interesting idea! brings to mind another method of making a mic.

Using a laser and mirror/reflective surface and an LDR you can make a microphone by shining a laser at the mirror and capturing the reflection on the LDR which is soldered to a jack.
I cant remember where i picked that info up, but i remember it was a spying thing. Some thing like how to listen over distances with an infrared laser or something.

Laser microphones! My college rented out some floors to a certain government agency that had special windows installed to prevent laser micing. Also similar, “Van Eck Phreaking”, a method of seeing the content of CRT monitors from their radio emissions… Van Eck phreaking - Wikipedia

Ah-hem! I worked on a similar project (which I will deny if asked directly) , testing crt shielding and what was called building transmission leakage (windows wires lights etc.)
It ended when my team added an array of mics to the waste pipes outside and could hear every hallway and toilet discussion.
A man I know worked on the north England version of the project and was so taken with his shielding idea for crt that he managed to refurb the office of his next contract with chicken wire like a Faraday cage. The office was near the royal navy radio station which houses some of the biggest radio transmitters. All was fine until a health and safety bod insisted the cage be earthed. This done, one night every crt and electrical item died. From what the royal navy never admitted. I may have told this before. But hey, I chuckle every time I think about it. 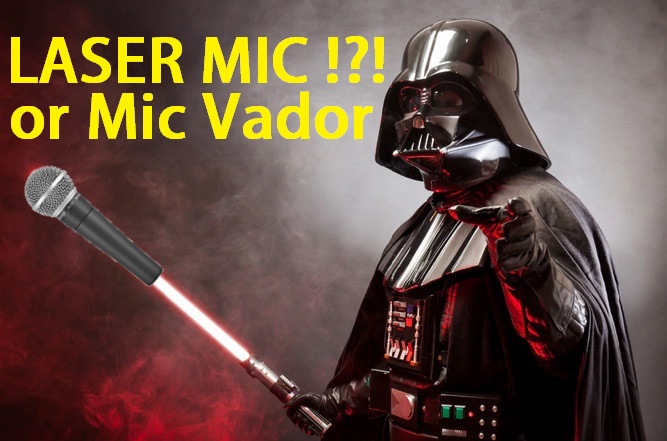 Very much agree -
Ken Nelson treated toads very well - caught and released etc.
Now they are proponents for synthetic vs natural -
The Pamphlet is a re-print of the original with an expansion on synthetic 5-MeO-DMT.
I believe Ken recently died and the proceeds benefited their cause.
Hamilton recently did a really good episode about it!

Also worth mentioning… if his process was violent… he was doing it wrong and did not respect the sacred nature of the Toad.

Not today, but over the last week. 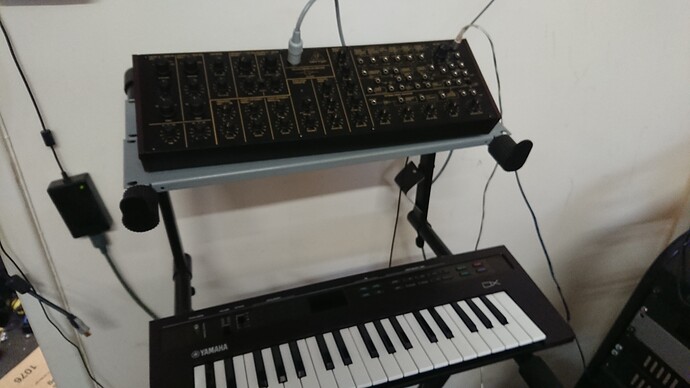 I am still exploring the Reface, its a useful little midi keyboard for the K2 though.

The K2, I think I prefer this over the MS20 Mini I had recently. It feels more robust, the mini’s keybed felt real cheap so no loss. And the k2 saved space, need some rack ears though…

“-Mail Forgotten In Circumstance To How I’m Holding Up-”

Through Hole Braids Panel / Control Board / Brain Board by Sebastian from JLCPCB. 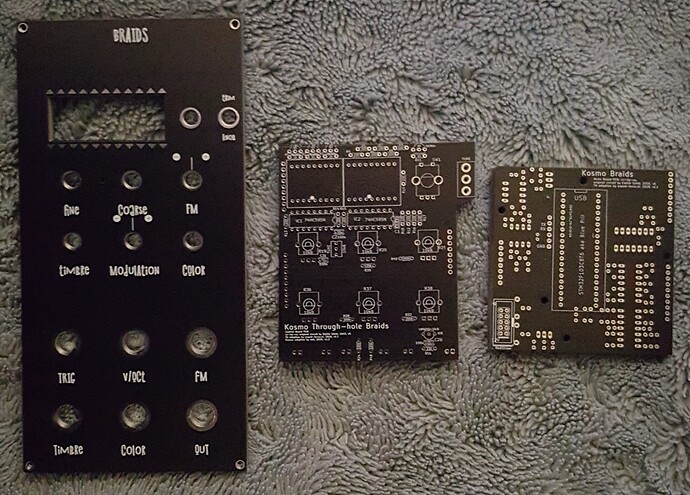 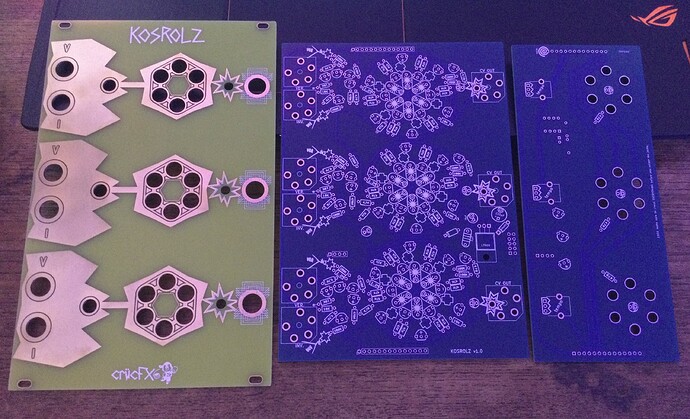 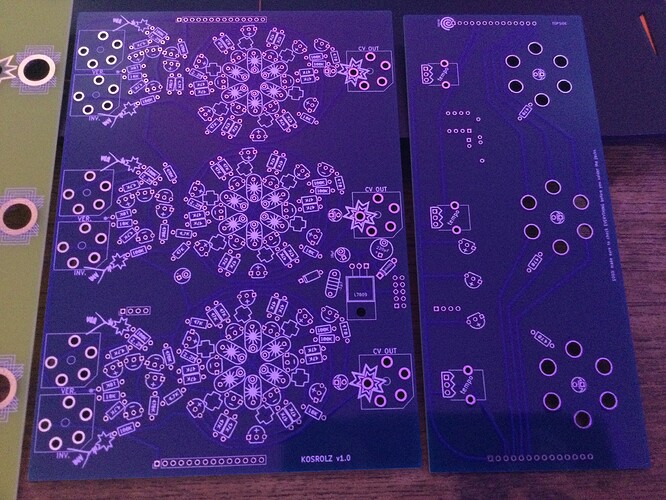 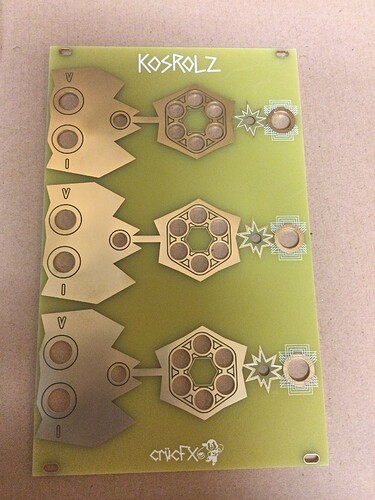 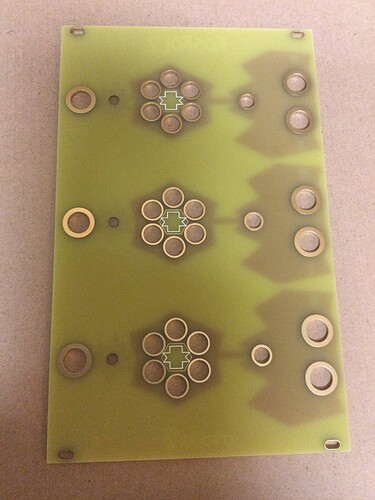 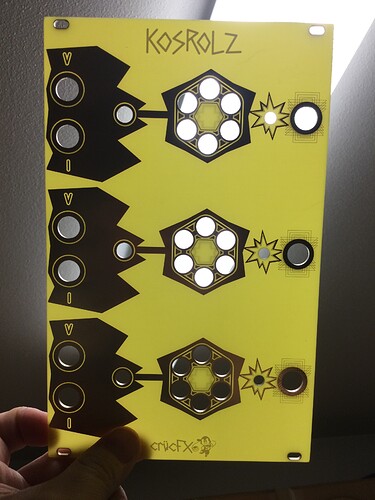 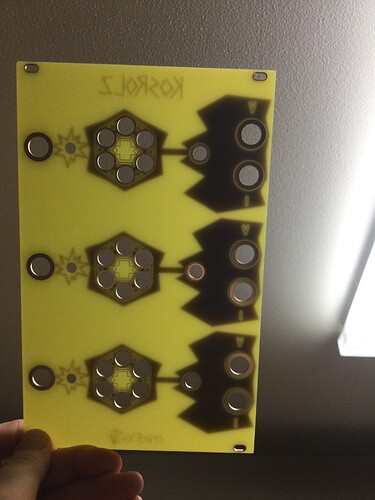