Anyone using or planning or considering an isomorphic keyboard?

I keep thinking I’d like to look into building one, though I have made no real moves in that direction.

I just learned about these hex key caps

documentation for the HEX keycap profile

which are used in this macropad

the 0xC.pad is a macropad with 12 hexagonal keys

the 0x33.board is an isomorphic MIDI key controller with 48 hexagonal keys

It’s OSHW, and there are git repos, though the keyboard and the page both are described as a work in progress.

and the keycap KiCad repo link is messed up, should be https://git.s-ol.nu/hw/kicad-lib.git .

It’s fun to play around with alternative layouts on touch interfaces, but I didn’t immediately feel this kind of layout would help me develop much intuition or help me get started discovering xenharmonic relationships, it felt like poking buttons at random. Difficult to commit to building the real thing in hopes its benefits become apparent after you stick to it!

Has the author posted any performance with their hardware? Curious about that.

I imagine it’d have to be better for xenharmonic purposes than a standard keyboard — couldn’t be worse anyway.

There are a number of different isomorphic layouts with various pros and cons.

I’d like to build something like this. I like layout of accordion much more than piano keyboard, but there isn’t lot of options of midi keyboards of those. Or I could by a midified accordion. My neighbors probably already hate me for having a harmonium in my apartment.

Aww… harmoniums are awesome! I used to have one that I bought at a yardsale. It really needed the cork replaced though. If I’d had a laser cutter back then it would have been a pretty easy fix. I ended up selling it. I still think about it from time to time.

I still think about it from time to time. 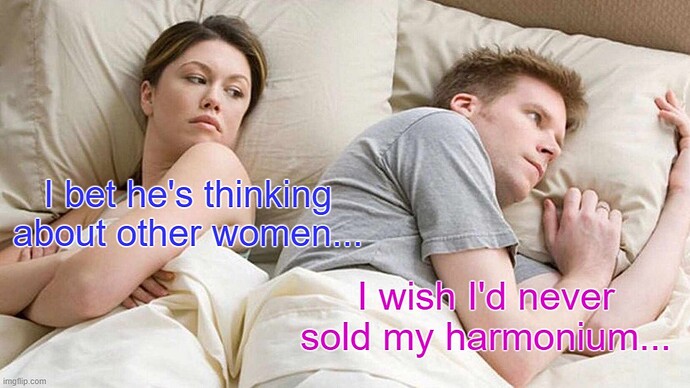 “Harmonium” can refer to

and Wikipedia claims the above is distinct from

and they don’t include the latter as a harmonium (it’s a reed organ). I dunno. Anyway, I used to have a thing along the lines of the last two. A friend gave it to me, I hauled it through a couple moves intending to fix it up, then got rid of it. Hasn’t kept me awake at night.

Label on the back said “mouse proof”; someone online said “A mouse proof reed organ is like an honest politician: They may have started out that way…”

mine was like the first.
on topic: maybe an isomorphic kb would be useful for chords ala an autoharp/accordion/etc?

Any Loopop patreons should check out his latest book update, there’s five new pages going over isomorphic grid controllers and chord shapes, with some suggested layouts.