I just made a dual power supply out of two 12v wall warts wired together. It seems to work great, I was able to power up the as3340 vco just fine. are there any risks of equipment damage or extra noise using this method or is the only drawback the current limitations and bulky transformers hogging two whole outlets? I plan on building a FC power supply eventually but due to international shipping costs/time and a limited budget I prefer to go with cheap/free solutions whenever possible. I also have some broken stereo receiver/amps and computer power supplies lying around. I heard that amplifiers also use bipolar power so I’m considering ripping one out and hoping it has +/-12v taps. What do you guys think?

As noted in the other topic, you’re not getting a particularly accurate 12 V. It’s not likely to cause any damage but it might throw certain modules off a bit. For now I wouldn’t worry about it.

ATX computer power supplies have ±12 V. They tend to be kind of noisy for audio and the -12 V is limited to much lower currents than the +12 V, but within those limitations they can work and can be very cheap, often free if someone’s tossing out a computer.

With amplifiers you’re probably looking at something that needs to be connected to wall power. Don’t do this unless you know what you’re doing, 120 V or 240 V can kill you if you mess up. An ATX supply plugs into the wall but is enclosed and as long as you don’t mess around inside it that’s fine.

Thanks, I think I might have an atx power supply lying about. I generally prefer to not get electrocuted when there’s other options available!

Are they 12v AC or DC wall warts?
Even if you have a single AC tap you can get +/-12v with a few diodes, caps and some standard linear regulators.

I built one with a transformer from an old stereo system, but I’d always recommend using a commercial AC supply / wall warts if you have one or at least make sure the mains side is fully insulated before connecting to mains. (Mine is fully insulated and sealed in a plastic box.

That’s actually what I was planning to do, I might use the schematic that you linked instead of the FC though. I’m waiting on an AC wall wart and an L7912 to arrive, I might have to buy some beefy capacitors but I’m hoping to salvage them from an old tv or something instead.

Speaking of dual DC wall wart power supplies, I remember a few people saying that while they can be built they are dangerous, e.g.:

I understand such a build is unreliable, that wall warts are not meant to be operated this way, but what exactly makes the setup unsafe too?

When he tests his, he does it outside from a safe distance, with an extension cord, but there’s no real explanation what could go wrong with it.

“Unregulated power bricks might work but voltages will vary a lot with load. Plus, they might catch on fire if/when you short the outputs together accidentally.”

Well, okay, but any dual power supply is going to be unhappy if you short the outputs. However, voltage regulators will probably shut down in that case. But worse things might happen with an unregulated supply.

That video’s actually where I got the idea from, that guy’s great. I’m considering attempting his “dead bug” method when I build the ms-20 filter. I’ve been using the wallwart for a few days with no problems. I made all of the connections with female dc jacks with screw terminals on the other end, with jumper wires connecting the two jacks so that I wouldn’t have to bare any wires or solder anything, minimizing possible points of failure and keeping the wall warts intact. I’ll build a proper power supply next week when all of the components arrive.

One risk of using duel supplies is that the regulators are configured to push the positive rail as opposed to the negative rail. I think the main outcome would be a poorly regulated negative rail under load. This is why you use a pair of 7812 and 7912 regulators instead of two 7812’s.

I’d like to discuss this again. If you wire up (carefully, cleanly, prudently, etc) a dual wall wart configuration and it doesn’t smoke out on you… what next?

How much would it benefit from going through the filter capacitor and voltage regulator sections of the usual MFOS / FC Power PSU circuit, minus the initial 1N4004 rectification diodes at the input?

If each wallwart already provides a stable and clean DC voltage, then there is no need for any further circuitry. If they are AC providers, then you need rectification and filtering and stabilizing (twice).

In the case of reclaimed DC wall warts from random old electronics, isn’t that a big “If” to expect them to be stable and clean?

There is not much to say about this in general other than to suggest that you investigate the power supply’s stability by adding a load to it and doing some measurements.

In the case of reclaimed DC wall warts from random old electronics, isn’t that a big “If” to expect them to be stable and clean?

Even in the case of new wall warts, load regulation is likely to be terrible. 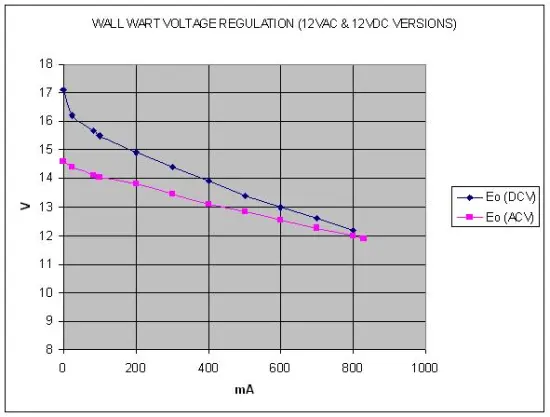 So you’d want to add regulation, probably. But keep dropout voltage in mind. For an L7812 the dropout voltage is 2 V, so you’d probably want to use 15 V wall warts to get 12 V rails. Or higher, but pay attention to heat dissipation. There are other, low dropout regulators that maybe would work with nominally 12 V wall warts but I’ve never used them.