This is the Barton Musical Circuits BMC021 Full Wave Dual Rectifier in Kosmo format, with some modifications. It’s a kind of wavefolder, taking the input signal, adding a variable DC bias, and rectifying the result.

I built it using the BMC circuit board mounted behind a Kosmo format fabricated FR4 front panel. 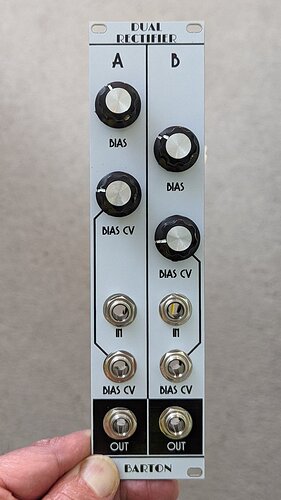 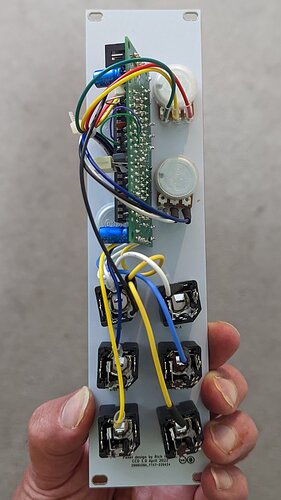 (I had some difficulties but none particular to this design.)

I did make some changes. As usual with Barton modules, I used 100 nF instead of 10 nF for the bypass caps, and I replaced the 10R series resistors on the power rails with 1N5817 Schottkys for reverse voltage protection. I also changed a lot of the resistors. The input and feedback resistors on the input op amp stages need to be 100k, for proper input impedance, but the following stages don’t need such high resistances, which can drive the noise floor upward. I reduced their 100k and 200k values to 10k and 20k. But that affects the RC time constant of the filter that does the output AC coupling, so I increased the associated capacitor from 100 nF to 1 µF.

The board mounted pots were too close together for my taste in Kosmo modules so I moved the first and third of them to panel mount, wired to the board mount footprints. Jacks were wired as per Barton’s design including a connection between the first unit’s output jack and the second’s input jack tip switch.

Well that’s it settled, my Santa letter is going to Rich this year.