Found this schematic and about to try it out !! Sounds pretty great. swap out two caps for a cymbal or Snare, easily add decay CV with a vactrol, or a simple filter to output, could also use a switch to those replaceable caps to give Snr or HAT selection. Gonna build this todaY

Would be a great addition to the Kosmo format = simple design, common components, all analog sound source, possibility for expansion a great learning tool. 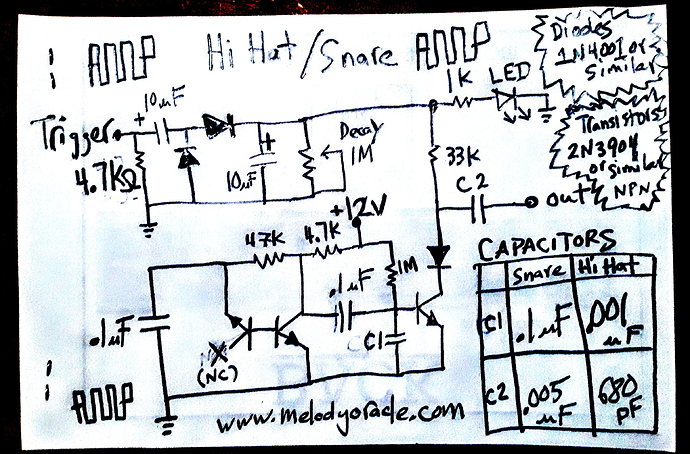 I have a few units that use an a “ghetto decay gate” like this. One thing to be aware of is that the cap doesn’t always charge fast enough to trigger every time, so for things like high-hats and rolls it can sound a little faded-outey. But it is, as you point out, pretty simple and elegant.

Let us know how you get on, simple enough to put together and I think I have all the bits.

How did it turn out?
Sound samples?

Mine was pretty shite. I built these about a year ago:


That’s auto-gained to hell. You can kind of hear how the cymbal sustain dies out after the first few triggers. The bass is super finicky. I had a snare too, but it wasn’t cooperating tonight-that floating collector noise takes a lot of juice and still ends up being more of a 5v click-a quarter note roll is going to sound like a delay, too. I want to try the snare noise and cymbal tone with a slightly modified version of Synthnerd’s op-amp AD circuit.
2 Likes
Caustic February 27, 2020, 2:35am #6 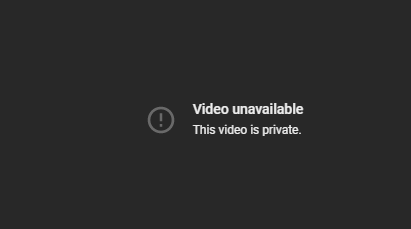 This was my first attempt to get this thing working…riiiight before I had to move, so I’ll see if I can troubleshoot it after I get into the new place. Didn’t work the first time I put it together, but it was my first attempt at freehanding a schematic straight to stripboard cause my breadboard was full haha.

It was stuck in “draft” somehow-thanks for the heads up @Caustic!

It actually sounds good dude. With a few tweaks it could be made more playable im sure. The sound isnt bad though.

i made this one only for hit, (i don’t like so much the snare, i have made other one snare module)
i add a buffer out and vactrol on decay and i thinks it’s a cool simple module !

the post on my web site (with a best schematic quality) : 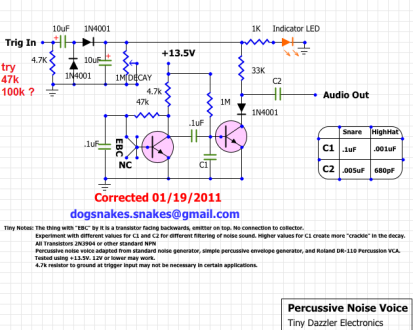 super easy to throw a switch on there to give different tonal characteristic…like hi hat or snr or just gnarly hit. I’m mostly after industrial / techno sounds, so gnarly = beauty haha.

cool sounds !! how do we filter out some of the gate sound ?? sometimes its desirable but would be nice to throw it onto a pot to dial it in.

I’m still at the “no idea what I’m doing” stage so can barely build circuits from schematics but its fun anyway haha.

Well, I don’t think you’re really hearing a sound from the gate in either of the ones I was playing. The cymbal kind of has a “ghetto gate” but that Wasn’t making a sound of its own. The bass is a twin-t so it’s already not really much more than a low pass filter that self-resonates out. They could be good for industrial though-especially as samples with heavy effecting!

well well, I am in luck for my monikor is Military Industrial Complex, and Industrial metal is what I dooooooo… may transform into industrial techno from all this modular obsession though ahahahaha.

I didn’t think your sounded like shit, unless maybe it’s just sounds that sound like shit that I’m after ahahah. if I wanted beautiful sounds I’d go open up a VST like omnisphere

What did you end up using for the input resistor?

honestly I don’t remember, in the original diagram the guy says that resistor (4.7) is not even useful in certain cases, I must surely keep 4.7k,
i think “try 47k / 100k” i wrote this on the schem because i’ve seen it in a forum, so i try it but with not really change
on the other hand I added an op amp to the output because the level was very little and a small vactrol on the decay pot to make open variation closed with an external CV
and the decay pot is a multi tour