Hey does anyone know an equivalent for the AD633AN or AD633JN? I’m trying to find some for the Music from outer space ring modulator module, and most of what I find are a little over priced, from china so I’m not sure about the quality, or are a little hard to find. Any ideas?

There is some discussion here

in which some blowhard says

Analog Devices charges $6.00 to $8.84 for SOIC AD633 in quantities of 1000+. So if a vendor is selling something for $3 you can be pretty certain it is either not new, not genuine, or not legally obtained.

It’s not China or whatever country of origin that should have you worried, it’s anywhere that has the part at prices too good to be true. Unfortunately this is just an expensive chip, and widely faked.

I found cheaper ones and they didn’t work those are numbered AD633JN .
bought those " pricey " ones and they worked AD663AN is the number on the ones that worked . but I defiantly had a problem with cheaper ones they would just get hot and the modules didn’t work . never really checked to see what the dif was between the two other than the numbers . I will try to find were I bought them it was a while ago but I remember they were pricey , so I guess what I am saying is that the JN’s didn’t work but the AN’s did in my exper. so it could be fakes or maybe there is an internal difference . but most likely Analogoutput is right that if its priced to good to be true they are probably fakes .

From the spec sheet, the A and J specify the temp range. The N is for the PDIP package.

I finally got my hands on two ad633JNs and was wondering if you found a way, or if there is a way to prevent them from overheating? I already tried putting capacitors between the voltage pins of the AD633JN and +12v and -12v, but it still begins to heat up

I think it my have been a matter of being fakes or there is issue with the AD663JN as opposed to the AD633AN’s which worked . I never really checked the spec sheet on the two to see if there was some kind of a difference internally that would cause a problem. so to answer your question my solution was to not use the AD633JN’s I used the AD633AN’s instead and they seemed to work with no issues not sure why though .

As @SCGator said, here is the difference 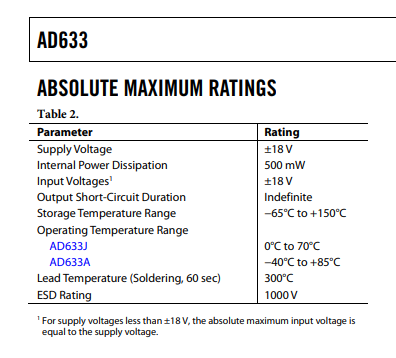 Unless you’re working at -20°C or +80°C, if one is working and the other isn’t, the other is probably defective, damaged, or fake.

thank you for the info , even though that seems like Michigan weather I don’t think thats the case here. more of a get what you pay for , cheap = fakes