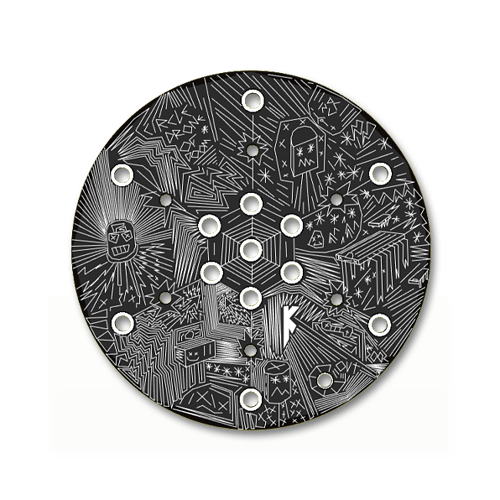 This is a pre order and will be released on 20th April. Any items ordered alongside this will ship at the same time. 2002 oscillator drone of doom is a beginner electronics project that encompasses the spirit of the 1000 oscillator mega drone but...

I just ordered one of these, but i am having trouble finding an equivalent DC barrel jack in Canada. The one linked in the BOM says its rated up to 25v and 3a. The closest thing i can find is a 30v 0.5a rated jack. Would this be sufficient to power this?

Thanks for any help!

I’m far from an expert but personally I wouldn’t do that.

Those numbers are maximum ratings for the amount of voltage/current the jack can handle. As long as you don’t go below ~15v and around 0.1A you should be ok. Most barrel jacks are suitable for this module.

The one you suggested will work.

One out there alive and kickin’ with it’s frinds 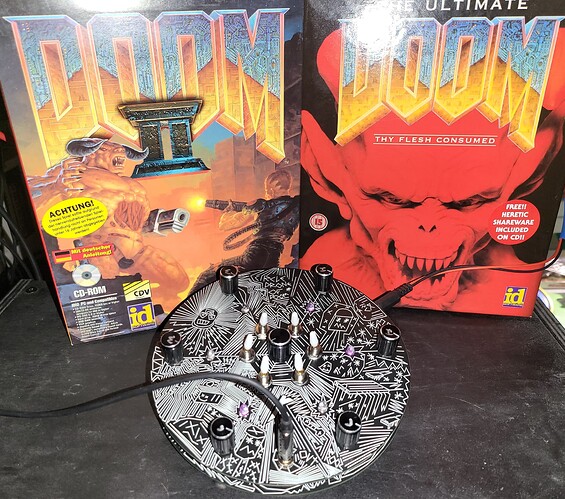 Just got my panels in the mail today. Got it all built up, but when I plugged it in to test I get no sound, but all the LEDs light up just fine. Is there anything I should check?

Hi welcome to the forum.

Hey sorry to dive in here like this. I bought this and the aaapppccc a while ago when I was first building, and never got around to them. Now I’ve built this fella up, and I can get NOTHING FROM IT. It is making me insane. Hit all the joints again today with the iron and nothing. One thing I did notice, was some of my joints are HUGE! I was using a new roll with higher flux, and it took me a minute to get used to it. I always figured that a little extra solder was okay, as long as it wasn’t dead or making a bridge, but maybe I’m creating a short? Idk. Do I need to clip the center leg of these transistors like the super simple oscillator? Thinking of just de-soldering and starting over. Any help is appreciated.

General advice for troubleshooting a module and asking for help FAQ

(This is a wiki post, please add and correct!) Look and see if others have had the same problem. Use the Discourse search facility to find topics where the module you’re building is discussed. Inspect your work. Verify all components are correct values. Look for solder connections that are rough, irregular, skimpy, dull, or missed completely (we all do that!) and reflow them. Look for solder bridges between pads and remove them. Check your cable. Make sure the red stripe connects to the -12V …

In this case there are no chips and only one power rail, which goes through a pot and fixed resistor to become the MasterPower voltage, so you need to adapt the above advice as appropriate.

If there is NO sound (all the switches are on, yes?) then that limits what could be wrong because mostly each oscillator is entirely separate from the others, all they share is MasterPower and the Mix output. So if nothing’s working it’s probably either MasterPower isn’t there, or there’s a problem with the output capacitor, resistor, and jack.

Do any LEDs light up?

Noooo! It’s been making me batty! Meter shows power to first pot around 12ish, but then drops to between 4-5 on the remaining. I just pulled the LEDs off, honestly a little tougher than I intended, and l pooped the panel off. I am super new to this, as in bought a soldering iron in May, but I’ve done more complicated builds by far. I think I’m just going to systematically pull and resolder? I know it’s just a little toy synth, but it kills me not having something finished. It brings on the imposter syndrome bad!

What are you using for power supply? Do any of the LEDs light up?

I can’t recommend unsoldering and resoldering parts willy nilly. Too much chance of damaging the PCB or the parts that way. Find the actual problem and fix it.

Sorry I need to be more clear. That “Noooo” was intended to answer the question of whether or not the LEDs were functioning. They did not light up, and I have since removed them. I then popped off the panel, not pooped, ha! Anyway, willy nilly was never the plan! What’s the best way to check it with my meter? Just check for shorts? I have tried a couple different 12v power supplies, multiple 1amps and a 5 amp. I was suspicious that it might be the power supply cap, or maybe resistor, although now that you mention the output that seems possible too! Gah. Thanks for the patience.

You said there was 12 V at the first pot, by the first pot do you mean the one in the center or one of the outer ones? Are you measuring the voltage from wiper (center pin) to ground or from one of the end pins? For the center pot it should be 12 V on one end pin and something equal or less — depending on the pot setting — on the wiper and the other end. Is that what you see?

If so then whatever you measure on that wiper, it should be the same at one end of each of the outer pots. For the outer pots, the voltage from the wiper to ground should be equal to that or less, depending on the wiper settings.

With the center pot and one of the outer pots turned all the way to one end or the other (not sure which end, try both on each pot) you should have near 12 V at the wiper of that outer pot. Do you?

You’re using SS9018 transistors, right? Have you made a Super Simple Oscillator before with one of these? Just to verify they actually work…

With the LEDs removed the oscillators won’t work. Or at least I’m pretty sure they won’t, I just noticed in this one he’s taking the output from the collector instead of the emitter, not sure how that affects it but I’m pretty confident the LED is needed.

Oh man so sorry to leave you hanging on here. I promise it’s not my style! I actually figured it out with my meter! Turned out to be a bad pot and a bad transistor. To answer your questions, yes they are 9018s, and no I hadn’t tested this bag! So far I only one failure, and I’ve made a couple simple osc since at your suggestion. I’ve been meaning to throw a couple together for this sympathetic drone thing I’ve been cooking up anyway. Also, the LEDs are absolutely essential, so you were spot on there. Anyway, I just wanted to say thank you; if you hadn’t been so patient and analytical about things, I may have side-tabled it out of frustration. You were right. Use the meter! I should know better honestly. I’ve been hanging around my uncle’s tv repair shop since the 80s! I just never took the plunge with diy until this spring. Now it rules my life. If it’s alright, I may reach out in the future if I get stuck. I have A LOT of builds to tackle; some little desktop stuff like ciat londbardes and meng qi, a couple bigger projects like the x0xb0x and crowminius, and of course the inevitable eurorack/Kosmo. Obviously problem solving is one of the most satisfying aspects of synth diy(it’s just so cool when you make your first sound), so I’m fairly certain I won’t need too much help, but you never know. If you ever have need of tubes or other odd components let me know, my uncle has had a tv/electronics repair shop since 1962, and he has an amazing amount of cool old components. Anyway thanks so much for the warm welcome.i feel right at home.

Hey. I am building my drone right now. I’m the video Sam says he uses a 1uF capacitor on the audio out and on the schematic and PCB it says that it’s a 10uF. Anyone know if the schematic is right?

BOM on project page also says 10uf. I’d go with the written word but that is me painting by the numbers not realy knowing what i’m doing

Welcome to the community

The point of the capacitor is to AC couple the output, removing the DC offset. That is, it is a high pass filter with a cutoff low enough not to mess up the sound; DC is zero Hz frequency so it always gets cut.

But the capacitor alone doesn’t make a filter. There needs to be a resistor to ground as well. There isn’t one in the circuit, so the input resistance of whatever it’s plugged into becomes part of the filter and along with the capacitor value determines the cutoff frequency.

Any of these is well below audible frequency so ought to be okay. But 10 µF is probably preferable.

If the downstream load is lower impedance, much under 10k, you could get cutoff frequencies in the audible range. There again 10 µF would be better.

Hello again. So I finished assembling my drone. When I plugged it in the pots were not responding how they should. I initially thought it was the color changing LEDs I tried to use thinking those might be effecting the sound and circuit. I tried to replace one (possibly damaging the circuit board itself) with a red LED and it did not make any sound but the red LED lit up. All of the 47k resistors leading to ground are reading 14.6k on my multimeter. Is that normal? Where could I be going wrong?

Also anybody have tips to repairing the platting on the LED thru hole? I damaged it trying to desolder the color changing LED on one of the oscillators. (Desoldering tips would be handy too)

(1) You can’t really measure resistors in circuit; at best it’ll tell you if the resistance is too high, but if you read a low value it’s just being affected by the rest of the circuit.

A litany of dumbassery

Tonight I decided to get around to makin the Kosmo ADSR. Everything went great, but at the last second i soldered the chip sockets in on the wrong side. Managed to de-solder the sockets, but now im going to have a hell of a time getting this sorted. It was going so well too! Anyone have any experience with this and maybe have some pointers? @fredrik? Im just glad i noticed before frying the damn ADSR chip. [juice.PNG]

(3) Repairing a damaged pad is generally difficult to practically impossible. Best thing usually is to just solder a small wire from the component to whatever it’s supposed to connect to. Which may not be obvious, but you can get it off the schematic.