Think of it as a challenge 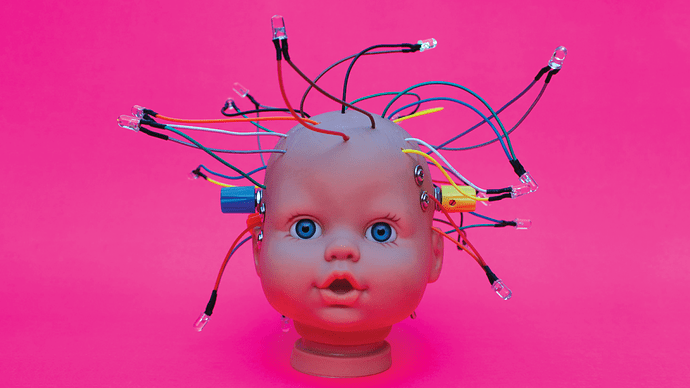 10 of the weirdest instruments in electronic music

From radioactive synths to sound-generating baby dolls, we survey the strangest DIY creations in electronic music-making

In those sections’ respective order, the Radiotone uses a Wimshurst electrostatic generator to create the necessary voltage, whose terminals are then connected to a Crookes’ partial vacuum tube (in which streams of electrons known as cathode rays were discovered). A German military Geiger counter dating from the Cold War era detects the resultant X-rays from the Crookes’ tube, emitting a click with every X-ray photon detected. This is then fed into a Bela board programmed with the Pure Data musical language.

What I love about this description of a modern electronic musical instrument is my feeling that finally, with the mention of Bela computer hardware and Pure Data software, we reach something I’m comfortable with.

I love JG Ballard, but his heroes always seem to be drawn, moth-like, to a doom that is defined by the likes of Eniwetok and Katrina and Chernobyl.

You may already have met Jim Ballard. He’s the young protagonist of the Steven Spielberg film Empire of the Sun, which is based on Ballard’s autobiographical novel (not an autobiography, it’s fiction) of the same name. After his baptism of fire in the Lunghua Japanese internment camp in Shanghai, I can well imagine young Jim dedicating the rest of his life to quietly documenting the wildest reaches of the human soul.

So there he was using the most toxic products of the twentieth century (cf: this instrument which tours the gothic films of James Whale (Wikipedia link) and the horrors of the Second World War) to feed his typewriter, an item as prosaic in his day as any microcomputer. This is alchemy.