i’m putting together an analog drum machine synthesizer and this is where i am so far: DIY Drum machine - Drum machine + Guitar - YouTube
Controller, ADSR + VCA, mixer and Sine wave generator modules are completed.

Now i’m thinking about how to approach the hi hats and snare drum sounds and i’ve settled on a white noise generator with 4 independent resonant high pass filters.

Now i’m wondering how i should combine them and where is the best point to derive the parallel independent filters from.

This is what i’m considering: 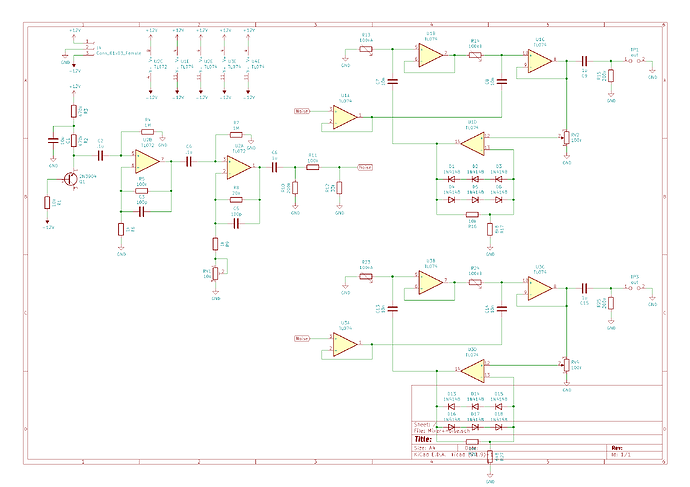 image2338×1653 51.7 KB
Removing the last .1u cap from the noise generator
connect it to the first stage of the filter
and choosing the opamp as the branching point for the parallel filters.

What do you guys think?

I note there are resistors missing from the HPF in your first schematic (I guess they’re actually panel pots connected to the connectors shown), but they’ve been added in the second. Maybe the first should be clarified in case anyone wants to use it.

I’m a little puzzled by the input to the HPF, specifically the 200k resistor. The capacitor and the 100k + 33k resistors already form a high pass filter with a cutoff of 1.2 Hz; all that’s doing is AC coupling the input signal. The 200k just lowers the resistance to ground (from 133k to 80k) so increases the cutoff frequency by about 40%, up to around 2 Hz. I don’t see the point of that.

But the noise source already has two high pass filters (C8/R10 in the first schematic, and C6/R9), both with cutoffs about 1.6 Hz. I’d think of those three filters only the first (C8/R10) would be needed. Or keep both that and C6/R9 if you really want to. But with one or both of these I don’t think you need C4 or the HPF input filter. (The op amps are ±12 V powered, right?)

As for the HPF input voltage divider (100k/33k) it reduces the level by a factor of 4, and instead the two stages of the noise source could be modified to give 4x smaller gain. Depending on the setting of RV4 the gain of that stage might be > 4, in which case you’d just have to increase RV4 and/or decrease R7 to lower the gain. Or it might be < 4, in which case you could lower the gain of the first stage (which is 101 as it stands).

The point of all that would be to eliminate everything between the last noise op amp and the HPF input buffer (U1A) — at which point you could eliminate the input buffer. Just connect the noise op amp directly to the 10 nF HPF capacitors. If as you say there are four HPFs then that’s four fewer op amps.