I did an ADSR some time ago, which has a slight leak.

example, if I use it to open a VCA, just by connecting it without triggering it, the sound goes very very slightly (but audible).

I decided to remove it from the case to increase the resistance as said in the description:

but it doesn’t really seem to work 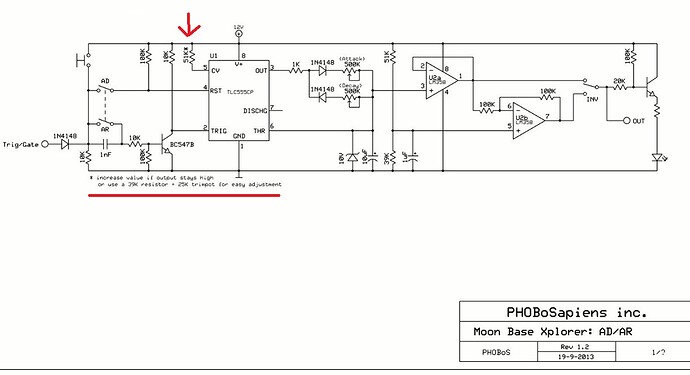 Can you check what voltage you see on pin 3 of the LM358 when the envelope has finished?
Is it 0V? If it is, check the output on pin 1, is it also 0? I suspect that the LM358 can’t go all the way down to it’s negative rail - or ground in this case.

Does your VCA CV input have some offset you can apply? I’d maybe look there…

Thanks ! i 'll checked this tomorrow.

just by connecting it without triggering it

Are you sure it doesn’t get triggered, even briefly, by the act of connecting it?

I do know that typically in this sort of envelope generator, once it’s triggered it takes a long time (several seconds) to get back down to near 0 V, no matter how fast a decay time you set, because the diodes’ conductivity drops when you get below ~1 V. The Kassutronics Precision ADSR uses op amps to get around that problem, mostly. Even so there is a slight nonzero voltage because the gate produced by the input transistor doesn’t go quite to zero volts, but it’s a matter of ~10 mV or so I think.

Are you sure it doesn’t get triggered, even briefly, by the act of connecting it?

i’m sure of nothing

and also I’m not sure what you mean, the trigger in is not connected (i’ve only tested it with the momentary push button), but it’s when i connect a cable on the output to the CVin of a VCA.

Not sure what that would mean for a 12V supply like this circuit… but it’s not surprising. I can’t think of any real easy fixes without changing the way the supplies are used - but then you start needing to add clamping diodes or things like that…

sorry I’m still unsure with the theory, does that mean testing to add a resistor in series between the output of the OP Amp and the jack out ?

I think I was facing a different problem but perhaps my 555 ADSR topic is of interest to you.

I ended up adding a precision rectifier to make it work (I used the schematic of the first pic shown in the wiki page). A precision rectifier is like a diode but it does not have a voltage drop, so in that regard, it is less disruptive when you add it in somewhere in the circuit. I am not an expert so I cannot explain things in detail unfortunately.

Does it even need to be a single supply op amp? The cap’s being discharged to ground, right? So it’s not like the op amp is being used to cut off negative excursion. How hard would it be to move the negative rail to -12 V?

I ended up adding a precision rectifier to make it work

Yeah, I was getting at that with my reply, but it sounds like that isn’t the (only) problem here. Though probably it is a problem: even with a dual supply op amp, my guess is you’d see the problem of slow discharge below ~ 1 V, and a precision rectifier would address that. Means adding another op amp though.

Thank you all
I stupidly tried a resistance in series on the output, around 10M I get a zero output, but when I trigger it instead of going up to 8V, obviously it only goes up to about 1V

Unfortunately I don’t have the space on the circuit to add a new opamp, and I don’t have -12V on this module.

… This now gives you the opportunity to build a compressor 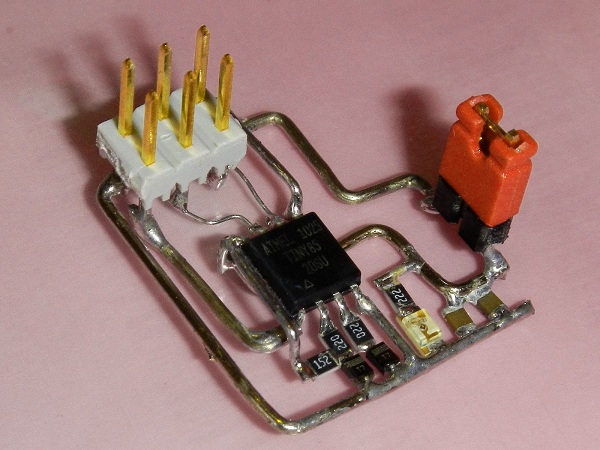 Yes I have already done it once or twice, I had thought about it but I also have to modify the power supply

but it might be worth it if it works

well, if I want to add the opamp would it be like this ? 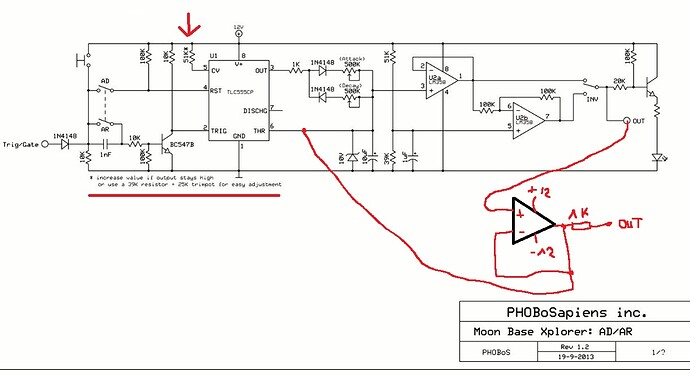 Hi, the Voltage gets injected by the path 100K resistor to the transistor base to the LED in the right end of your drawing. The LM324 cannot pull it down to Zero, since this is not a rail-to-rail OpAmp. The 100k Resistor would be better connected to ground the base of that transistor. Also, the LED should be in the Collector path of the transistor. Your circuit, right now, would create about 0,6V + 1.8V=2,4V at the base connection, if the circuit would be unloaded by the OpAmp and Out-Pin load.

Just looking at the circuit again. (Maybe I am wrong regarding the Output stage and the Transistor. The LM324 is a singe rail OpAmp, it output stage should be able to drive down to ground level.)
One other thing may be causing this effect too. Pin 3 of the OpAmp is floating around 0,6V if Pin 3 of the 555 is low. You have to have a Resistor parallel to the 10uF Capacitor to ground the noninverting input pin of the OpAmp. You could try a large one in the range of 1Meg, I would shorten the max decay time a bit. This can be compensated with the 10uF cap being larger, e.g 15 or 20 uF. The noninverting input has to have a ground reference somehow.

Welcome to the forum

nice to look at that 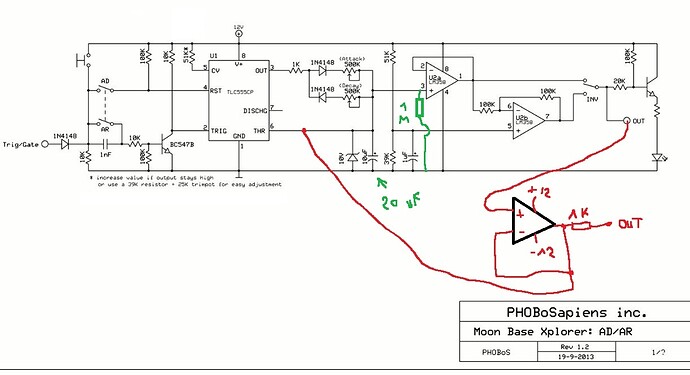 The first problem, as @jaradical pointed out, may be because the at least some versions of the LM358 can only swing to about 100 mV above the negative rail (which is ground). Or so the datasheet they quoted seems to say. On the other hand, the TI datasheet seems to suggest their version will go down to typically 5 mV or maximum 20 mV (with a 5 V supply). So if you’re not using a TI branded LM358 the first thing I’d try is swapping for one of those. If that improves things you’re on the right track and if it improves things enough, great. If it’s still not good enough I’d consider changing over to a dual supply, disconnecting the negative pin from ground and connecting to -12 V. You did say you don’t have -12 V on the module but I’m sure it could be kludged in if needed. You can still use the LM358 or you could switch to a TL072.

The other problem is that (probably, I haven’t tried this circuit) the capacitor once charged cannot discharge quickly all the way to zero volts because the diode’s conductance goes way down below ~ 1 V; it takes several seconds to discharge. And there’s a similar problem on the attack where the last ~ 1 V takes a long time too, but the behavior is much more objectionable on the decay, so you can just fix it on that side. A way to fix that involves adding an op amp, with the diode in the feedback path. Replace 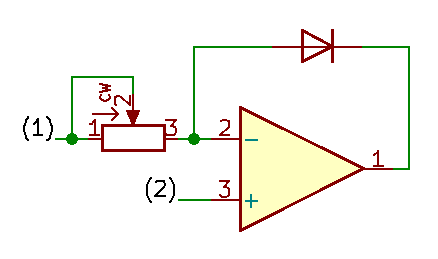 Here to discharge the capacitor (which connects to (1)) to ground (which connects to (2)), since the op amp’s + input is at 0 V it wants to make the - input ground too, in which case there would be a voltage drop across the pot. So there would be current through the pot (by Ohm’s Law) and the only place that current can go is through the diode. So in order to bring the - terminal to 0 V the op amp brings its output to about -700 mV to make the diode conduct. Then the capacitor has a path to discharge quickly, regardless of how low the voltage on it is. On the other hand, if (2) were +12 V, then to make the - terminal +12 V too current would have to flow the other way through the pot, hence through the diode, which it can’t, so charging the capacitor is blocked. So this behaves like an ideal rectifier, conducting when the voltage at (2) is below the voltage at (1) and not otherwise. Of course this op amp has to have a dual supply, since it needs the output to go to -700 mV, so you’d again need -12 V in the module.

Which problem are you trying to solve with the added op amp?

i have only 1 problem, it’s the non zero on output.

it is by comparing with the Kassutronic shematic, that I added the opamp in black and red.
but maybe I still misunderstood

it will be the most easy, it’s the same pin, i would only have to change the power !