I’m building a “half century” of 50 “Super Simple Oscillators” and I’ve read though the other threads on issues and problems with it (I discovered on my own that the transistor in the schematic was backwards but that’s an important find!) but I still have two questions:

I discovered on my own that the transistor in the schematic was backwards but that’s an important find!

It’s drawn from the bottom. Emitter towards plus (see here).

The LED does not actually do anything to the sound itself, correct? It’s just a pretty light as far as the circuit is concerned if I understand correctly.

Well, it shows that the oscillator is oscillating. If the transistor doesn’t do anything, it won’t light up.

For the complete instrument that might not be intolerable, but it also might be better to have a buffer of some sort.

You can add a simple summing mixer, see e.g. here for a 6-input mixer that you can expand to any number of inputs (mute switches and potentiometers are optional, the 100k summing resistors are required).

The LED isn’t needed to make the oscillator work, but it does drop some voltage so affects the oscillator pitch, I believe. You can try breadboarding with and without the LED to see what the effect is.

I’m not really worried about anything other than unity gain between all the oscillators.

More experiments. I thought the oscilloscope was in frame but um. Not so much. Sorry about that. Trying out mylar vs electrolytic capacitors. Gnomus Half-Century avalanche part II - YouTube

then the forum software will embed the video in the post, so you don’t have to click away to YouTube to watch it. (Similarly, in many cases a link to a web site on a line by itself will turn into an embedded preview of that site.)

Oh, thank you. I kept trying to embed and I just couldn’t figure it out. Thanks @Dud and @analogoutput !

so what are your resistor values for the red and blue leds? Great unit love it.

Thanks!
I tried putting a resistor before the LED’s (I think one of them has a 1k still on it) but it doesn’t seem to make much difference – the voltage at the LED is about 3 volts no matter what I do (well, no, it’s lower with a resistor in front of it so what I mean is that as long as it’s below 5? volts I think I’m safe.)
Most of the LED’s are only driven by one of the 5 oscillators in a given column. But some are driven by all of the oscillators. I haven’t burned out any LED’s yet.

And now it’s all wired. 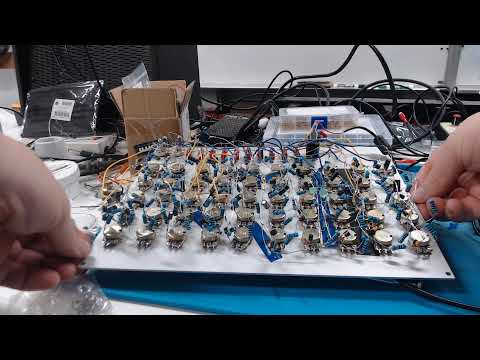 Eventually I’ll do a deep dive with all the many errors and mistakes and oddities with it, and then one where I try to make music with it.

Man, I’m so happy this site and message board are here because I learned so much from this.

“It wont stay in tune but its amusing, and amusement is why we are here”.
This. Absolutely this.