I’m wanting to modernize an old BINGO console and flashboard. The console has 75 holes, each with a microswitch. As the balls are drawn from the blower, they’re placed into their respective hole, closing the switch which turns on a light on the flashboard.

It’s dead simple, “brute force”, with a large cable that has to contain at least 77 wires. 1 ground, 75 positives for the numbers, one positive for the BINGO letters up the left end that are always on.

It’s also a bit fragile since it has to be at least 50 years old. The oddball 28 volt DC incandescent bulbs are expensive and often burn out or the contacts get iffy.

What I’d like to do is replace all 80 bulbs in the flashboard with Neopixels, controlled by an Arduino or RPi or the like. After getting the basic duplication of the original function duplicated it would be neat to add features like different colors for the last and next to last balls called, turning off lights in BINGO for game patterns that leave out one or more columns, and color animations.

But the part I’m finding to be the tricky bit is a system that can read at least 75 switches closed simultaneously. In practice no game ever reaches all 75 numbers without a winner but it could so such a state has to be supported.

In addition to that it would be nice to have 5 toggle switches for the BINGO letters and a few momentary buttons to trigger effects like scrolling text on the flashboard, animations etc.

It would also need a reset switch to clear the board, ideally mounted so the mechanical bit that dumps the balls back into the blower would also reset the board.

But the major reason for this is to eliminate that clunky “firehose” full of wires between the console and flashboard. Replacing it with a USB cord would be nice, or an Ethernet cable and repurposing some of the pairs for powering the controller and Neopixels in the flashboard. Of course the sockets would be labeled NOT ETHERNET. Do not connect to networking equipment.

Sounds a lot like reading a keyboard. You need a microcontroller with enough GPIO pins, and the switches arranged in a matrix with diodes. This article might help with details: Keyboard Matrix Scanning and Debouncing – Frog in the Well

Create a MIDI keyboard for 108 keys in a matrix as suggested, only use 90 switches of course for bingo, send the output over a simple MIDI cable to the flash board. Use a MIDI input on another arduino to generate a note on or off trigger from the signal. You can use 74HC595 to get as many outs as you need, each chip can handle 8 outputs. 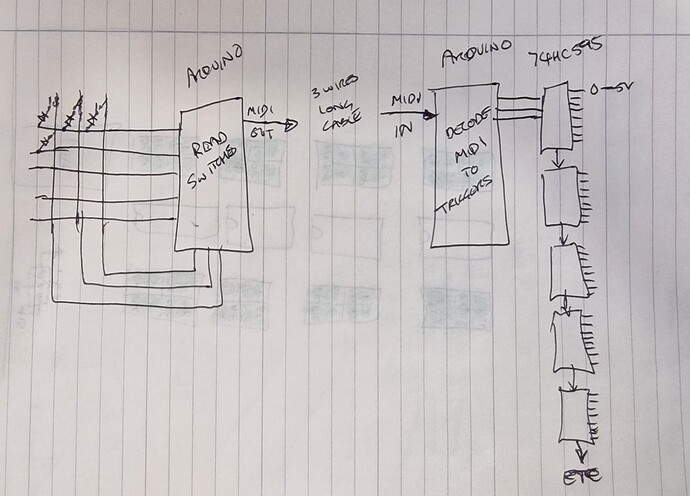 Something like this but of course expanded as needed

And you can actually buy boards for this ready made for conversion of old keyboards etc to MIDI, so an encoder board and decoder board already exist.

That’s a very elegant use of MIDI protocol. I wrote a reply based on an untested design I worked on a couple of years ago, but this is better so I deleted it.